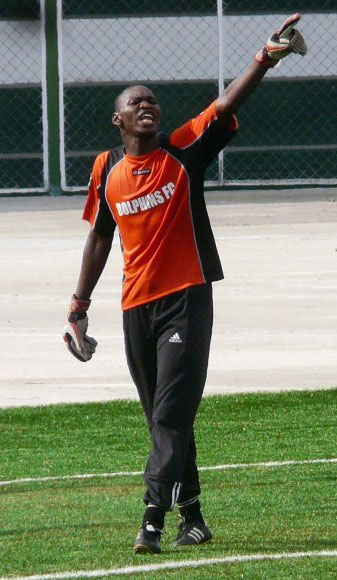 Goalkeeper Rotimi, one of the Eagles set for Obama Cup in America.

Public Relations Officer, PRO of Nigeria Football Federation, NFF, Demola Olajire told P.M.Sportsonline from Abuja this evening that a team of 20 players and eight officials would be led by the Eaglesâ€™ Chief Coach, Samson Siasia.

It was gathered that the Eagles Team B will fly from Abuja to Lagos tomorrow afternoon before connecting a Delta Airline flight from Lagos to Dallas at 10.25pm. The delegation is expected to land in Dallas, Texas at 10am on Thursday, 4pm Nigeria time, to get set for the Green Bowl Soccer event.

Organisers of the tournament say Costa Rica and Panama would play the tournamentâ€™s opening match before the Eagles take on Mexicoâ€™s senior team at the Cotton Bowl Soccer Stadium in Dallas at 7pm on Saturday, 1am, Sunday in Nigeria.

The matches would continue on Sunday with the Losersâ€™ Final at 4.30pm, Dallas time, while the Final Match holds at 7pm, 1am, Monday in Nigeria.

”Siasia and his team would stay at the Double Tree Hotel in Dallas, where they would feature in the tournament,” Olajire said this evening. Warri Wolves’ goalkeeper, Chigozie Agbim and Dolphins goalie, Sunday Rotimi lead the players that would represent Nigeria in the tournament.

Others are Ekigho Ehiosun of Warri Wolves, who scored against Sierra Leone in a friendly match in Lagos two weeks ago, Gambo Mohammed, Victor Ezeji of Sharks, Harrison Egbune and Bernard Okorowanta.