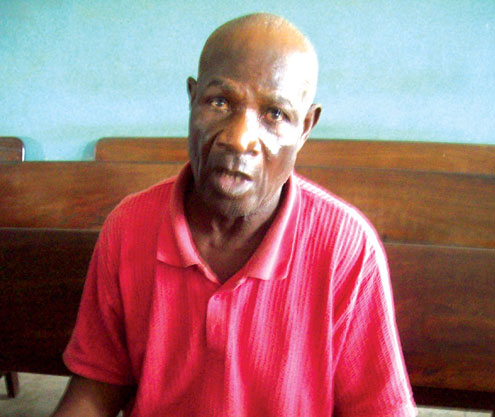 Pa. Adesomoju Odoro, who is a landlord of 3 Aiyetoro street, Ebute-Metta, was accused of having unlawful carnal knowledge the primary two school girl,(name withheld), at his residence, where the girl had gone to defecate.

It was gathered that the old manâ€™s act became known when the aunty to the girl was looking for her and found her in the grandpaâ€™s room.Â  When she was asked what happened between her and the old man, she said the grandpa â€˜fucked herâ€™, meaning had sex with her.Â  Her sister raised alarm which attracted people from the neighbourhood before the old man was arrested by the police.

He was arraigned before the court on a one count charge of having unlawful carnal knowledge of the girl.Â  This, according to the prosecuting police officer, Sergeant Paul Inedu, is contrary to Section 218, of the Criminal Code Cap C17, Vol. 2, Laws of Lagos State of Nigeria, 2003.

The charge reads, â€œThat you Adesomoju Odoro,of 3, Aiyetoro Street, Ebute-Metta, on 21 February, 2011, at about 1.30 p.m, atÂ  3, Aiyetoro street, Ebute-Metta, in the Lagos Magisterial District, did have unlawful carnal knowledge with (name withheld), (f) 9 years old of (address withheld), and thereby committed an offence punishable under Section 218, of the Criminal Code Cap C17, Vol. 2, Laws of Lagos State of Nigeria, 2003.â€

His counsel, Mr.Ola Ogunbiyi urged the court to grant him bail in liberal terms, as he is presumed to be innocent until proven guilty by the court.

The presiding magistrate, Mrs. Folashade Kayode, granted him bail in the sum of N200, 000, with two sureties in like sum.

The sureties, according to the magistrate, must deposit the sum of N50, 000 each in the account of chief magistrate of the court, and provide evidence of paying tax to Lagos state government, evidence of livelihood and must be residing within the magisterial district.