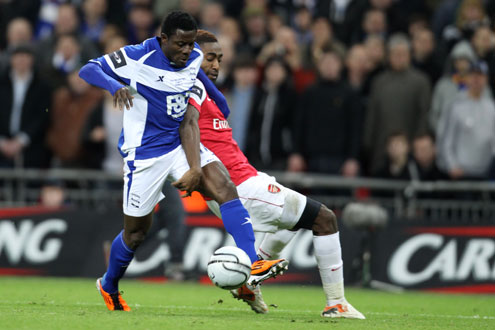 Arsenal’s six-year quest for a trophy goes on after Birmingham snatched a dramatic last-minute winner. No thanks toÂ Â from substitute, Nigeriaâ€™sÂ Â Obafemi Martins who tapped in a very easy ball for Birmingham to beat the Gunners 2-1 in the Carling Cup final.

It was, though, no more than the Blues deserved following a battling display as Arsenal, without injured captain Cesc Fabregas and England winger Theo Walcott, once more failed to deliver when it mattered most.

Nikola Zigic had headed Birmingham in front on 28 minutes, but Robin van Persie equalised with a fine volley.

The Arsenal fightback, though, failed to materialise as Arsene Wenger’s men could not make the most of their possession and were dealt a killer blow when Szczesny spilled Zigic’s knockdown after Koscielny’s mis-kick and Martins slotted home in front of the Blues fans to send the Midlands club into Europe.

Martins told Sky Sports: “I think this is the easiest goal I’ve ever scored in my career – and it’s very important.

“I’m glad I scored today and I’m glad we won. I think it was my second touch. I’m very happy. It means a lot to the fans and players – we really need this trophy.”

Boss Alex McLeish said: “It’s an achievement when you consider who we were up against.

“We weren’t given a prayer by the pundits and the bookies but we believed. It was a titanic performance by the players.

“We had a gameplan and managed to get our noses in front, that gives you a great chance.

“We thought if we could keep in it for as long as we could we’d get the quick guys on who can win it for us (Martins and Cameron Jerome).

Arsenal itself last won a trophy in 2005 and their manager Wenger said: “We got what we expected from Birmingham – they are a team who fight very hard and cause a lot of problems from long balls.

“I wanted to end our wait for a trophy today. Both teams gave everything and congratulations to them – they have got their trophy.

“But we have regrets with the way we conceded the (Martins) goal. What can you say? You have to be positive because he (Szczesny) is a young boy.

“He has to pick himself up from that goal and hopefully he can do that.”

The Dutchman was injured scoring Arsenal’s goal – a first half equaliser – and was substituted after the break.

Wenger added: “We lost Cesc (Fabregas) during the week and now Robin is not in good shape after this game. It’s a knee problem which we will have to assess on Monday.”