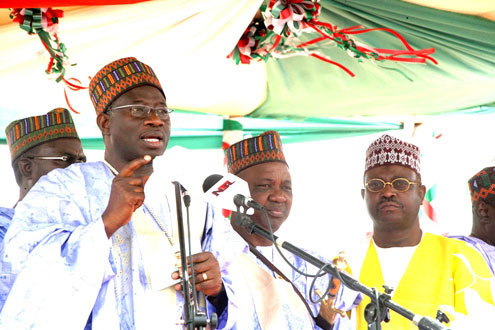 There was total chaos on Lagos roads this morning as security forces awaiting the arrival of President Goodluck Jonathan for a campaign rally at the Tafawa Balewa Square, TBS, blocked major highways and expressways, causing untold hardship to Lagosians.

As early as 9 a.m, all roads leading to Central Lagos were blocked by police and other security agents.

Many Lagosians going to work were held up in the traffic jam for hours. Frustration was clearly etched on the faces of motorists as well as commuter bus drivers who did everything to manoeuvre out of the gridlock but could not. In doing this, they compounded the problem by blocking all access roads to Lagos.

Many motorists who spoke with P.M.NEWS condemned this naked display of power by the PDP-led Federal Government, asking why all the roads should be blocked simply because the president was coming to campaign.

â€œThis is unprecedented. I have never experienced this kind of traffic situation in my 35 years of living in Lagos. This is an abuse of power. I donâ€™t know why I should be made to suffer simply because somebody was coming to campaign in Lagos.

â€œIt is shameful and a disgrace that this should be happening here in this modern era,â€ complained Ifeanyiwa Izuchukwu, a staff of one of the multinational corporations on Victoria Island who was in the traffic jam for more than four hours.

Many commuters who had earlier boarded vehicles for their work places were forced to disembark after sitting for hours in the buses with no movement. Some of them were seen on the roads walking to their offices.

At the venue of the rally, which was reportedly organised by the Minister of Finance, Dr. Olusegun Aganga, the crowd was scanty as at the time of filing this report.

Our reporters at the venue reported that only a few hundred supporters had gathered at the TBS venue of the rally as at 12 noon, two hours ahead of the time scheduled for the commencement of the rally.

Frustrated members of the PDP at the venue lamented what they described as the poor turnout of supporters to welcome the president to Lagos. They blamed it on poor mobilisation.

At the campaign rally were former President Olusegun Obasanjo, Chief Bode George who was released last Saturday from prison after serving a two-year term for fraud.

Femi Pedro, PDP governorship aspirant was also in attendance. Sunny Ade and 9ice were also contracted to entertain guests at the occasion.

Jonathan was on his way to the venue of the rally at the time of this report.