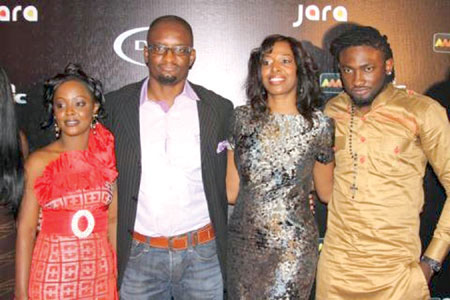 The launch, which took place at the Genesis Deluxe Cinemas, The Palms Shopping Mall, Lekki, attracted the creme de la creme of the Nigeria entertainment industry, who strutted the red carpet that preceded the main launch amidst cocktail and canapes.

The new series, which airs every Saturday evening at 7.30 p.m., will be hosted Big Brother All Stars winner Uti Nwachukwu and comedienne Helen Paul.

Speaking at the launch, Biola Alabi, MD, Mnet Africa, said Africa Magic launched the new programme to give movie lovers and fans an opportunity to see behind the scenes in Nollywood and get the inside scoop on whatâ€™s going on in Nigeriaâ€™s vibrant film industry.

She added that the series will also give fans and Africa Magic viewers the chance to catch up with their favourite Nigerian stars as they chat about their stellar careers.