Alex, Zoe Out Of Nigerian Idol 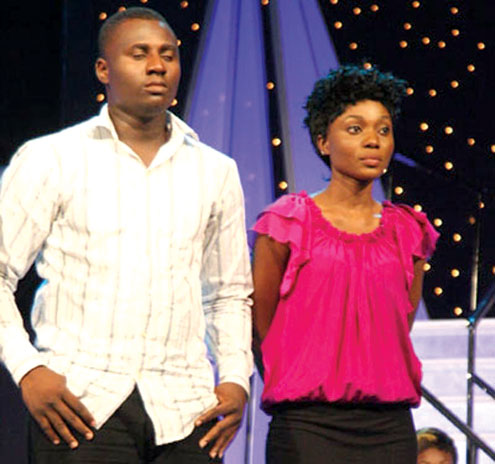 The countdown to the 27 March finals of the soar-away Nigerian Idol is officially on. The tension is heightened and the emotions are greater. The Top seven contestants have now been reduced to five during a very emotional result show.

The contestants, having performed top Micheal Jackson hit tracks for the audience votes, hoped and prayed all week that Nigerians would vote for them and see them through to the next round.

The guest performer of the last week show was DIPP who, following penultimate weekâ€™s theme, performed songs and choreography to the delight of the audience.

In no particular order, Yeka Onka was declared safe first and was put out of her misery, followed by BB and Naomi.

When the judges were asked to pick among Zoe, Glory, Alex and Emmanuel who they thought would leave, Audu thought Zoe had sacrificed her vocals for dance in the previous performance. Jeffery was of the opinion the Emmanuel, whom he referred to as Nigeriaâ€™s Brian Mcknight, did not do as well as he should have. Contrary to Jefferyâ€™s opinion, Nigerians voted Emmanuel to stay in the competition, and voted Glory as well, leaving Zoe and Alex to go home. Zoe and Alex performed a last time amid tears by their fellow contestants.