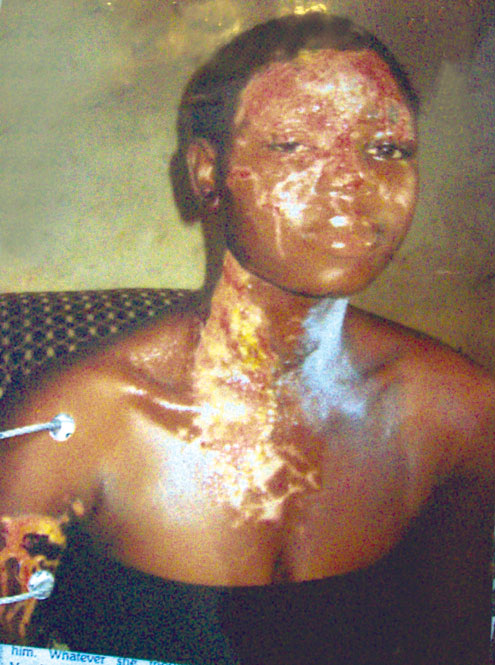 A 28-year old mechanic, Yusuf Salami, has been arrested and taken to court for allegedly pouring acid on his ex-lover who is a student of the Lagos State University, LASU.

He was arraigned before the court on a three-count charge of attempt to kill, misconduct and conduct likely to cause breach of peace.

Count one of the charges reads: â€œThat you Yusuf Salami on 26 December, 2010, at about 7:45pm at check point area, Badagary, in the Lagos Magisterial District did attempt unlawfully to kill one Basirat Raheem by pouring acid on her face and, caused her bodily harm and thereby committed an offence punishable under section 320(1) of the Criminal Code cap C 17 Vol. II Laws of Lagos State of Nigeria, 2003.

And count three reads: â€œThat you Yusuf Salami on the same date, time and place in the aforesaid Magisterial District did conduct yourself in a manner likely to cause the breach of peace by pouring acid on one Basirat Raheem in a plublic place and thereby committed an offence punishable under section 249(d)of the Criminal Code cap C 17 Vol. II Laws of Lagos State of Nigeria, 2003. 24 march 2011.

Yusuf, however, pleaded not guilty to the charge, but the magistrate, Mrs. J.Ugbomoiko, ordered that the accused be remanded in prison custody until 24 March 2011, the trial date, when his application for bail would considered.