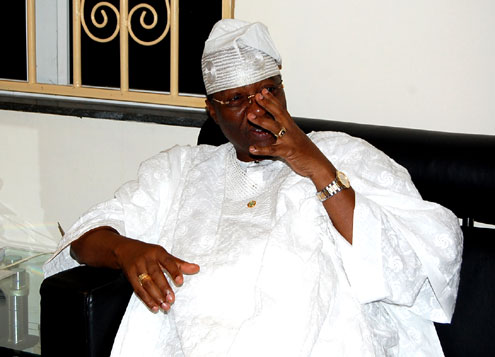 The purportedÂ  plan by the Ogun State Governor, Otunba Gbenga Daniel and some of his loyalists to appeal last Thursday judgment of the Federal High Court, Abuja may have suffered setback as some of the candidates from the faction and their supporters are set to defect to another party.

P.M.NEWS gathered this morning that the state governor is on his way to Abuja to meet with President Goodluck Jonathan on the next line of action, but some of his loyalists who believe nothing positive will come out of the meeting are about to defect to Peoples Party of Nigeria, PPN.

A close aide to the governor told our correspondent this morning that the governor had told them to stay action on any plan until after his meeting with the president.

According to the aide, â€œwhen we held our meeting on Friday after the judgement on Thursday, we saw the reactions of some members, but the governor told us not to take any action as he will be meeting with the President today either before the president goes to Calabar for his campaign or later in the day. We are waiting for the outcome of the meeting and then we would know what to do. Though, we have option B on ground. But let OGD come back from Abuja first.â€

Our investigation revealed that some of the candidates from the governorâ€™s faction are already discussing with the leadership of the PPN in the state.

Confirming this to P.M.NEWS this morning, an executive member of the party who pleaded anonymity said: â€œYes, we have been meeting and the party has concluded that Gboyega Nasir Isiaka (GNI), the governorship candidate from the OGD faction is going to be our party flag bearer in next monthâ€™s election. Other candidates are Mrs. Lola Abiola- Edewor, Aremo Segun Adekoya, Hon. Ladi Adebutu and others. If our plans work out well, the flag off will be held on Wednesday in Abeokuta.â€

When our correspondent contacted one of the aides of Hon. Ladi Adebutu who is the Commissioner 1 in the Ogun State Local Government Service Commission, he said: â€œTruly my boss has been pencilled down in PPN, plans to stay back in PPD and hopes to join the OBJ camp because he believes that he can getÂ  something confidently and with the assurance there compared to an unknown party like PPN. Before the end of the work tomorrow, we will know where he will be heading to.â€

The Federal High Court sitting in Abuja last week Thursday delivered a judgment on which faction of the PDP is the authentic and recongised one between OBJ and OGD in the state, the court affirmed that Olurin led candidate is the recongised faction in the state.

P.M.NEWS gathered that the OGD faction had engaged the services of a caterer who had been cooking in the Government House for their celebration on Thursday, believing that the judgment will favour them.

An Abeokuta-based fuji musician, Alhaji Sefiu Alao Adekunle had been contracted to perform at the celebration which was slated for Ipokia, the home town of their governorship candidate GNI, but Justice Abul Kafaratu scuttled the preparation with his judgment.