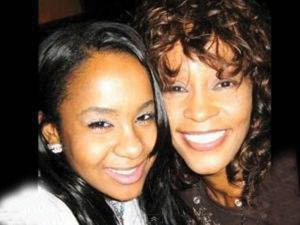 Whitney Houstonâ€™s daughter is apparently following in her motherâ€™s troubled footsteps after being photographed snorting a white powder said to be cocaine.

Bobbi Kristina â€œKrissiâ€ Brown, 18, is well aware of the dangers of drugs. Her motherâ€™s career was blighted by addiction and her father, singer Bobby Brown, has also needed rehab treatment.

Yet the teenagerâ€™s former boyfriend, who took the pictures, claims she too is addicted to cocaine.

â€œWhitney needs to see what her daughter is doing to herself. If Krissi doesnâ€™t stop soon, this addiction to cocaine will kill her.â€

Krissi, an only child, celebrated her 18th birthday on Friday and was still 17 when the pictures were taken at a friendâ€™s house in the town of Alpharetta, Georgia, where she lives with her Grammy-award-winning mother.

An article in National Enquirer magazine claimed she regularly indulges in marijuana and â€œguzzles beer and gets smashed on Everclear, a potent grain alcoholâ€.

Her unnamed ex-boyfriend claimed to have witnessed wild behaviour during a two-and-a-half-year relationship.

At one party, he said, â€œKrissi was pretty wired. I also saw her kiss a man and drink a 40-ounce bottle of Budweiserâ€.

Krissi admitted that it was her in the photos – but claimed she had been set up.

On her Twitter page she wrote: â€œThe pictures – a former very dear person to me did this. Set me up to make it look exactly what it looks like. God will smite them yes.â€ Confusingly, she added: â€œBut itâ€™s really not what it looks like -People will do anything for money which is extremely sad, and Iâ€™m very hurt by this.â€

Krissi said of her ex-boyfriend who sold the pictures that it was â€œa horrible relationship that went sour. I was in love – he was in love with money. Iâ€™ve learned my lesson.â€

She added that her mother had been supportive during her recent troubles. â€œMy mom just comforted me to the max and Iâ€™m so thankful for her.â€

Whitney Houston, 47, has won more awards than any other female recording artist. In a 2002 TV interview she admitted abusing drugs. But asked if she was on crack cocaine, she said: â€œFirst of all, letâ€™s get one thing straight. Crack is cheap. I make too much money to ever smoke crack.â€