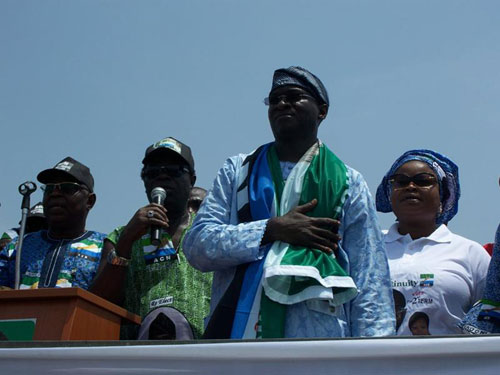 Lagos State Governor, Mr Babatunde Fashola (SAN) on Monday thanked Lagosians for turning out en-masse at the flag off of his re-election campaign rally on Saturday, stating that he has not endorsed any Labour Party candidate for any elective position in the State.

Governor Fashola who disclosed this in an interview with newsmen at the Eko Hotel, Victoria Island after the commissioning of the first of its kind in Nigeria Geographic Information System (GIS) for the State, explained that he is a full fledged, proud member of the Action Congress of Nigeria (ACN).

â€œAnybody who supports any candidate in Labour Party is voting against me and voting against the ACN and we will not accept it. Anybody who wishes to campaign should campaign on his own strength and not on the strength of what we have done as the ACN government in Lagos State.

â€œThey are sending all sorts of disinformation around cloaking under the guise of Labour Party, saying â€˜some labour party is supporting Fashola, or some Labour Party is supporting this or thatâ€™. I disassociate myself from anybody using my name to campaign for anybody or partyâ€, he reiterated.

Speaking on Saturdayâ€™s flag- off rally, Governor Fashola said with the massive turnout of Lagosians and with the Tafawa Balewa Square filled to the brim and bursting at the seams, Lagosians have shown clearly where the power base in the State lies.

â€œWe appreciate the outcome, it shows that Lagosians appreciate the efforts and sacrifice that we have made in the last four years working for them in the sun and in the rain and this is the full reciprocity of the social contract.

While responding to a question about the on-going screening of civil servants, the Governor said the exercise is about updating the data base of the staff strength as some people have retired and have to be deleted from the Oracle database.

â€œWe are just checking and it has nothing to do with any ethnic issue or lay off. I made a commitment to all public servants that this government will not retrench any worker. I stand by that commitment. Also it will be politically suicidal to even think of that.â€

He said: â€œWe need to continue to update the database of the state especially as people come in and get out of the system so that we have reliable data and this is part of what we have come here to do today with the Geographic Imaging System (GIS).â€