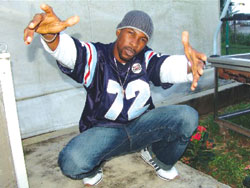 Star Quest has since inception in 2002, been anchored by a NigerianÂ superstar musical act and Rugged Man would be anchoring the programmeÂ for the third consecutive year.

The trio of Paul Play Dairo, acclaimed R & B crooner, Freeze, popularÂ  radio on-air personality and KC of KC Presh, winners of the firstÂ edition of Star Quest, have also been selected as judges for this yearâ€™s edition of the musical talent hunt programme.

As judges, they would be saddled with the task of pruning the large number of applicants who are expected to besiege the audition venues for a chance to participate in Star Quest, down to the 36 who will ultimately compete at the Fameland.

Even though the grand prize winners will be determined by the public who will vote their preferred musical band via SMS, the judges will play a vital role in determining which band gets to the finals.

Star Quest remains Nigeriaâ€™s only musical talent hunt show dedicated to the emergence of musical bands in the country.