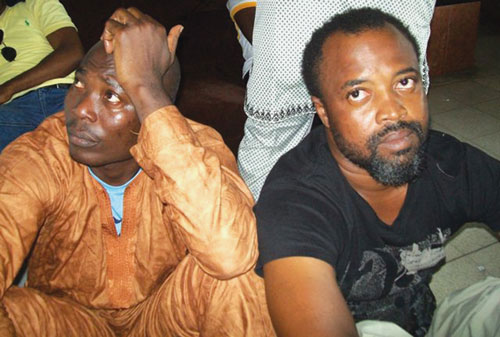 â€¢Kolawole Sosanya and Ahmed Folarin shortly after their arrest.

The National Drug Law Enforcement Agency (NDLEA) has aborted a plan by a major drug trafficking gang to import 6.4kg of white cocaine worth about N64 million naira into the country through the Murtala Mohammed International Airport (MMIA) Lagos State, Southwest, Nigeria.

The drug was packed in 16 flat parcels in 8 female hand bags.

Each bag which contained two parcels carefully hidden inside it had to be cut open to recover the drugs.

One of the suspects, Kolawole Sosanya Olayinka, 38, arrived at the Lagos airport from Brazil en-route Dubai in an Emirate flight on Sunday with the drug in his luggage.

The second suspect, Ahmed Folarin, 37, who is a member of the gang in the country that received Kolawole at the airport was also nabbed.

The content of the bag include female hand bags, shoes and blouses.

Describing the latest onslaught against drug barons as impressive, Chairman/Chief Executive of the Agency, Ahmadu Giade noted that the success was a result of the state of emergency declared on the Nigerian/Brazil route.

He warned that the agency will do everything to make the society drug free.

â€œThis no doubt is a result of vigilance and meticulous search by the officers. It is not only impressive but also professional. The passenger that came in with the drug from Brazil and his Nigerian accomplice were nabbed in the process. Obviously, tough times await drug barons,â€ he vowed.

Airport Commander of the Agency, Alhaji Hamza Umar said that both suspects were apprehended at the car park while attempting to smuggle the drug at the international wing of the airport.

â€œThe drug was industrially concealed inside female hand bags in the luggage of Kolawole Sosanya Olayinka, a passenger on Emirate flight. His Nigerian accomplice Ahmed Folarin was also caught in the process of smuggling the drug out of the airport. They have both made useful statements regarding their involvement and investigation continues,â€ Hamza stated.

Kolawole Sosanya is a single father of a ten year old daughter. He hails from Ijebu in Ogun State but has lived in Brazil for the past four years.

He claimed he was enticed with the sum of N1.5 million offer.

â€œI am a poor orphan trying to survive the frustrations of life. I was promised the sum of N1.5 million naira to bring the bag from Brazil with the drugs. My intention was to assist my only daughter and my grandmother that took care of me.

â€œThe bag was given to me in Brazil. They told me the parcels were only three but upon my arrest, I was shocked to see 16 parcels. It was a plan for them to reduce my fee. I would not have settled for N1.5 million if I had known the actual quantity,â€ he stated.

Ahmed Folarin, his accomplice who claimed to be selling cell phone accessories at Lagos Island hails from Kwara State.

Investigation is ongoing and both suspects will be charged in line with the NDLEA Act.