Fans Weep For Alasari At Burial In Abeokuta 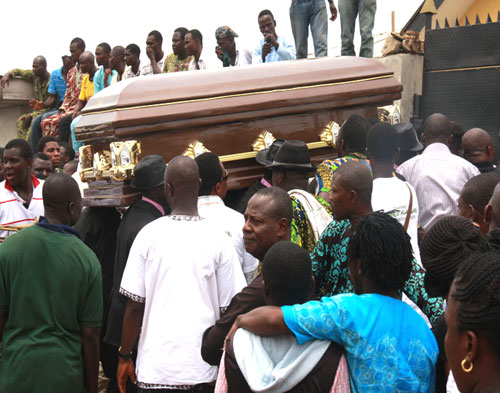 The remains of Alasari being taken to the graveyard.

Hundreds of movie fans wept profusely this morning in Abeokuta, capital of Ogun State, Southwest Nigeria, at the burial of Ishola Durojaiye, a.k.a. Alasari at Ita Elega area of the ancient town.

As early as 10 a.m, sympathisers swarmed roads that lead to Ita Elega like Ago Odo, Adedotun, Mokola and others. The fans tried to catch a glimpse of the brown colour gold plated casket conveying the corpse of the late Alasari to his Ita Elega residence.

The pall bearers were inside the premises of the late Alasariâ€™s bungalow at Ita Elega as at press time. The funeral ceremony was being delayed because of the late arrival of the funeral train.

Christian clerics were awaiting the arrival of the corpse to commence the service while the final resting place of the late Alasari was being dug in front of his house, as at the time of filing this report.

An artistesâ€™ night was held yesterday at the residence of the deceased.

Abeokuta-based fuji maestro, Shefiu Alao, Olaiya Igwe and Amusan, a.k.a. Mr. Latin were among the top artistes who honoured the late Ishola Durojaiye at the night.

Durojaiye died last Sunday while travelling to Lagos to work on his new movies. The tyre of his Pathfinder SUV burst around Onipepeye, causing the vehicle to crash.

The other three occupants of the vehicle were later treated and discharged at the Federal Medical Centre, Abeokuta.