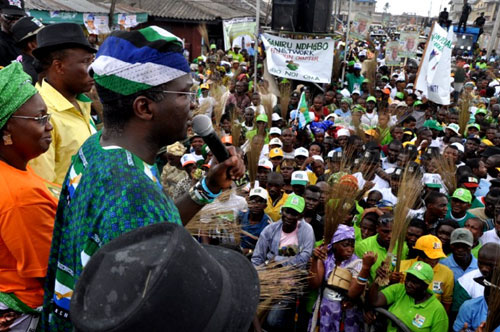 The Lagos State Governor, Mr Babatunde Fashola (SAN) on Friday said an improved life and well being awaits the people of Ajeromi Ifelodun Local Government area if they massively vote to ensure the victory of the Action Congress of Nigeria candidates in the 2011 general elections.

The Governor stated this at the campaign rally of the Action Congress of Nigeria in Ajeromi Ifelodun Local Government which was held at the Baale street junction.

He added that the administration will construct more roads, hospitals, schools and provide water to the people if returned to office by the votes to be cast in April.

The Governor explained that the people of the area will be the major beneficiaries of the Lagos Badagry Expressway and the light rail system which will run through Ajeromi Ifelodun, stressing that it will improve their economic well being.

He urged the people to be very vigilant and refuse to part with their voters cards as many people have been going round seeking to buy them for N2,500.

The governor reminded that anyone who sells his card for such a paltry sum has not only sold his conscience but mortgaged his future and that of his children.

He reiterated that before they accept such an amount in exchange for their cards, they should consider many things such as the hassles they went through in the process of getting registered.

Governor Fashola added that the cards being collected are not going to be used for any tangible purpose but would be burnt by those gathering them because they have no good intentions.

The governor emphasised that now is the time for all Nigerians to say no to continuation of the Peoples Democratic Party (PDP) in office, saying in the last 12 years, Nigerians have been left worse by the PDP in all the 27 States where they have governing and in the centre.

He said many residents of Ajeromi Ifelodun who would have wished to travel during the festivities could not travel because of the bad state of roads like Lagos- Ibadan and Benin- Ore- Asaba roads.

Governor Fashola said this is in addition to the fear of being kidnapped which is one of the new afflictions on innocent citizens that have come to be a trademark of the Peoples Democratic Party (PDP).

He said 14 areas including Badagry, Epe, Ojo, Ifako Ijaiye, Lekki and Iba have already been identified in the state where the government intends to build houses which would be offered for sale on affordable mortgage payment basis.

He said over 500 hectares have already been set aside for the housing scheme which will assist many people become home owners.

Speaking earlier, the State Chairman of the party, Chief Henry Ajomale said Governor Babatunde Fashola (SAN) has done the people proud during the first four years and deserves to be given another mandate.

He said the people have not seen anything yet but should give Governor Fashola and other candidates presented by the ACN in the 2011 elections their votes in order to witness more transformation in the State.

Among those who attended the rally were the First Lady, Dame Emmanuella Abimbola Fashola, the Deputy Governor, Princess Sarah Adebisi Sosan, members of the State Executive Council, party leaders, traditional rulers and supporters of the ACN from the Local Government area and across the state.