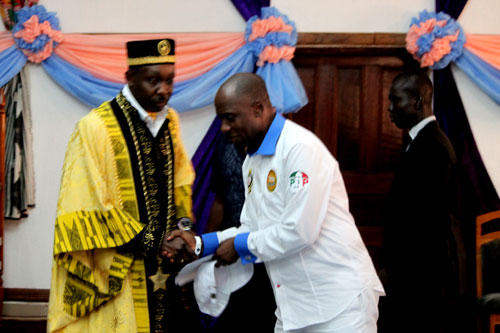 The people of Bonny Kingdom in Rivers State have restated their resolve to vote massively for the Peoples Democratic Party in the forthcoming general elections in view of the positive impact the administration of Rotimi Amaechi has had on their lives in the last three and half years.

Presenting their position at a rally of the Peoples Democratic Party in Bonny, Friday, Warisenibo Rodaford LongJohn, Frederick Tolofari and Senator Denton West amongst others recalled the numerous achievements which the PDPÂ  government has brought to their doorstep, describing Chibuike Amaechi as a leader whose name one â€œcan go to the bankâ€ with.

â€œThe people of Bonny have no alternative to PDP as Governor Amaechi and President Goodluck Jonathan have proved that the party has the capacity to provide good governance and quality leadership and its attendant dividends of democracy,â€ Tolofari said.

He also said â€œwe will vote for the governorâ€™s re-election to enable him consolidate on the gains of his first tenure, emphasising that the rally was an opportunity for the people to celebrate the governor whose personal commitment to the safety of lives and property â€œbrought peace to Bonny kingdom and its creeksâ€.

Also speaking, Dr. T. A. T. Allison, who decamped from the Democratic Peoples Party, DPP, said Governor Amaechiâ€™s programmes and projects were his major campaign tools, describing the visit to Bonny as a mere formality.

Addressing the crowd that attended the rally, Governor Amaechi thanked the chiefs and people of Grand Bonny Kingdom for their show of solidarity and promised that they would not be left out in the scheme of things.

Governor Amaechi said he would liaise with the Federal Government for the completion of the Bodo/Bonny road project which, he said, was important to the people of Bonny in view of the economic activities going on there.

The governor also promised to provide potable water and fulfill his earlier promise to build four more new health centres in the area as he explained that Bonny, like Omoku, was one community that is fast developing to compete with Port Harcourt, and requires government to take development to the area to improve the quality of lives of the people.

Governor Amaechi hinted that the Federal Government has already written to the state government of its intention to upgrade the Federal Technical College Bonny to a Polytechnic and asked the people to be ready to make land available for expansion of the institution.

The State Chief Executive and PDP candidate requested the people of Bonny to actualize their promise to support and vote President Goodluck Jonathan, himself and other PDP candidates.

Also speaking, the Minister of Foreign Affairs, Mr Odein Ajumogobia described Governor Amaechi as a humble and disciplined leader, pointing out that within his three and half years in office he performed more than the past governors and expressed the hope that another four years for him would mean more development for the state.

Highlight of the campaign rally was the presentation of flag to the House of Assembly candidate for the constituency by the Party Chairman, Chief Godspower Ake, as well as a courtesy visit on the Amanyanabo of Grand Bonny, King Edward Asimini William Dappa-Pepple, who accorded the governor a royal blessing.