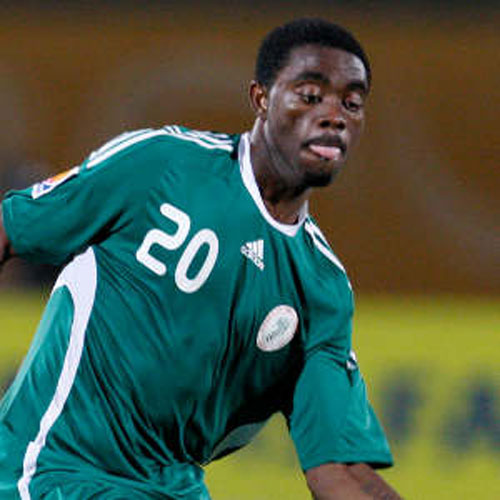 Lukman, scored for Nigeria and missed a penalty in the match against E-Guinea.

Nigeria’s U-23 Eagles today, Saturday 26 March, 2011 brighten their chances of playing in the next Olympic Games as they thrashed Equatorial Guinea 5-0 in a qualifier at the Ogbemudia Stadium in Benin City, Nigeria.

The goals started pouring in when Odion Igalo netted the ball in the 15th minute, Lukman was on target in the 27th minute while Nosa Igiebor made it three before the break in the 45th minute.

The Lillestrom of Norway and former FC Abuja midfielder got his brace in the 67th minute while Warri Wolves striker Ekigho Ehiosun closed the day with a 90th minute superb strike to give the Dream Team a resounding victory.

Lukman missed a penalty for Nigeria who dominated the encounter for the entire match. The junior Eagles could have scored more goals, but the Guinean goalkeeper made some brilliant saves to the delight of Benin fans.

Ealier before the match, Governor of Edo State, Comrade Adams Oshiomole commissioned the refurbished dressing rooms of Samuel Ogbemudia Stadium and promised to do more for sports in the state.

The governor, who arrived the stadium with a large entourage said he is delighted with the standard of work done at the locker rooms, which have air conditioners. He disclosed that his administration will leave nothing to chance to ensure that the edifice meet up with international standards.

He also revealed that plans are on ground to revive Bendel Insurance, adding “we cannot have a magnificent stadium like this and leave Insurance to play in the lower division. Insurance deserve to play in the Premier League. So, it is our dream to see the team back in the top flight soon.”