Burnt Balmoral Hall To Be Rebuilt In 2 Weeksâ€™ Time 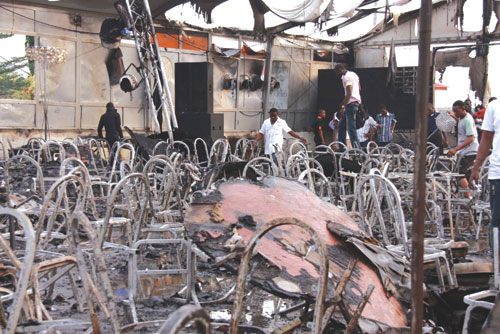 The Balmoral Hall, Oregun, Lagos, Southwest Nigeria gutted by fire yesterday will be renovated and be in better shape in two weeksâ€™ time, the management has promised.

Speaking with P.M.NEWS this morning, the Managing Director of the high profile events place, Ezekiel Adamu, said work will commence on its renovation today and will hopefully be completed by 10 April.

The management of the hall also pledged to ensure that the new Balmoral Hall will be better structure than the burnt one while necessary precaution will be taken to prevent fire outbreak in future.

Asked the extent of the damage and how much will be needed to put the new hall in place, Ezekiel said the management has not concluded its calculation of the damage but its repair will gulp millions of naira.

When P.M.NEWS went round the hall premises this morning, expatriate workers and engineers were seen trying to assess the extent of damage and how to commence its renovation.

Other workers who also spoke with our correspondent promised to hasten work on the hall.

They were seen pulling down some of the debris at the place.

The City People Awards of Excellence was holding at the Balmoral Hall yesterday when fire gutted the whole arena.

The fire incident compelled the organisers and participants to postpone indefinitely the ceremony.