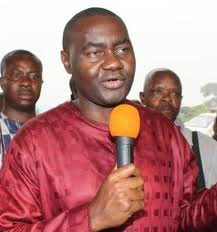 Magnus Abe : shot by the police

Nigerians have been called upon to accept the postponement of the Senate and Federal House of Representatives elections in good faith.

The senatorial flagbearer of PDP for Rivers South East, Hon.Â  Magnus Ngei Abe made the call while reacting to the postponement of the National Assembly elections. He said although it was frustrating to Nigerians for the elections not to hold, the postponement could be a blessing in disguise.

Hon.Abe said INEC so far has done well in the registration of voters and mobilization of Nigerians pointing out that the decision could have been as a result of a serious hiccup.â€œThis election day could have been a fantastic outing for Nigerians.

If INEC says it is postponed, I want to appeal to those who came out today, to come out again on Saturday. It is our country. This is not too much sacrifice to makeâ€,he said.

The PDP flagbearer said he was excited to observe that virtually every adult Nigerian was involved in the process of the election and therefore appealed to them to bear with INEC , adding that what has just happened is a human process and hoped that INEC would rectify the situation