Thumbs up for INEC as Nigerians vote 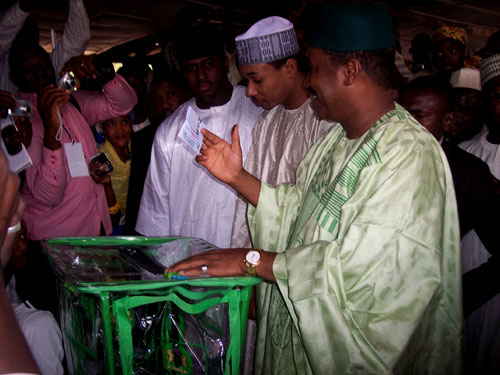 Gov. Ibrahim Shehu Shema of katsina state casting his vote during the NASS election in Dutsinma.

Smarting from the last week canceled National Assembly election nationwide, Nigerians on Saturday trooped to polling units across the nation to elect their representatives at the National Assembly.

In Katsina state, registered voters started the journey to their polling units as early as 6:53 am. At most of the polling units within the Katsina metropolis visited around 7:15 am, a large number of voters were seen submitting themselves to INEC officials who were accrediting the voters in readiness for the election proper.

Accreditation started as early as 7:50 am under a very peaceful and orderly ambience. However, in Wakinli Kudu 2 polling unit within the Sabon Kasuwa area of the capital city, two women who were registered at the polling unit during the voter registration exercise were not accredited for the election as their names were missing from the INEC voter register brought by the electoral officials.

The women; 33 years old Mrs. Usman Haffsat and 40 years old Mrs. Iliya Binta, told this medium that they registered at the polling unit during the voter register and brandished their voter cards to authenticate their claims. Indeed, the cards bear similar polling unit details and code numbers with other voters in the polling unit. They were both visibly agitated that their names were not found in the voter register as the implication dawned on them.

The National Youth Corp member who is the Presiding Officer at the polling Unit; Ms. Adeboje Oluwadamilolo, while responding to questions about the missing name,s stated that she will still have to recheck the register with a view to ascertaining if their names were omitted in the course of producing the register but asked the aggrieved women to calm down and exercise patience.

At the popular Modoji Primary School which houses 5 polling units, a large turn out of women voters were seen being accredited. The Resident Election Commissioner; Mr. Abubakar Umar Garba Wara, leading 13 heavily armed soldiers, was on hand supervising the accreditation process as voters organized themselves in a single file undergoing accreditation.

At Kofar Kaura Perimary School polling unit 3, voters who besieged the polling unit for accreditation were not being attended to at about 8:18 am when our reporter visited the school. Electoral officials were not on ground to accredit voters albeit, they waited patiently while other electorates at the other two polling units within the primary school compound were being accredited.

A Peoples Democratic Party agent; Mr. Awwal Lambu told this medium that the delay in the arrival of the election officials was due to the delay being experienced at the Independent National Election Commission headquarters in the state where sensitive election materials were being distributed as confirmed to him by the partyâ€™s agent at the INEC Headquarters.

At TV Viewing Center Polling Unit in Dutsinma Local Government Area of the state where Governor Ibrahim Shema registered to vote, about 400 voters out of the registered 1,147 voters had been accredited to vote at about 8:47 am. The Presiding Officer; Mr. Mustapha Sanusi told our reporter that accreditation of voters started at the polling unit at about 7:50 am as all materials required for the election arrived the polling unit quite early.

Governor Shema arrived at the polling unit at about 11:47 am and was immediately accredited alongside his wife, Mrs. Fatima Shema and two sons; Yamani and Usman. The Governor, soon after being accredited, casted his vote at exactly 12:05am.

Speaking after casting his vote, Governor Shema told reporters that he is encouraged by the conduct of the INEC officials and the security operatives at the polling unit. He appealed to voters to wait patiently and peacefully after casting their votes to see the outcome of the exercise.

At Sarkin Yara Ward in Daura Local Government Area, former Head of State and Presidential Candidate of the Congress for Progressive Change; Gen. Muhammadu Buhari was accredited at about 10:13am after which he went home before coming back to cast his vote at noon. He expressed satisfaction at the turn out of voters and INECâ€™s preparation which had led to the peaceful and orderly conduct of the polls. He enjoined voters to come out en masse to vote for him next Saturday when the Presidential election is scheduled to hold.

At Kuki, a village within the Dutsinma Local Government Area, over 800 women turned out to cast their votes over and above the very few number of male voters. The Chairman of the Katsina state Universal Basic Education Board; SUBEB, Mr. Suleiman Nuhu Kuki after casting his vote praised the conduct of the INEC officials and security operatives who ensured that a peaceful atmosphere existed for the conduct of the voting exercise.

According to Mr. Kuki, â€œGenerally, the conduct of polls here is very peaceful. We were accredited early enough and voting started at about 12 noon. I have just voted and as you can see, everything is peacefulâ€

Virtually all the major roads within the capital city were devoid of the usual vehicular traffic in compliance with the â€œno movement orderâ€ and the city was in all, relatively peaceful and tranquil as the indigenes defied the hot sun to cast their votes.