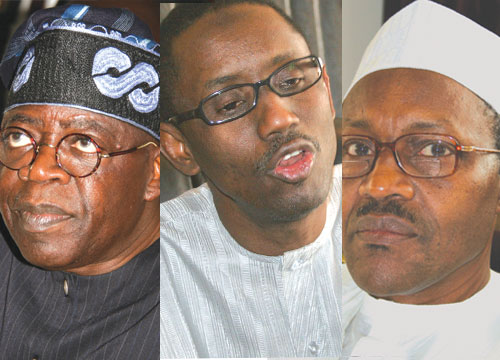 The last-minute talks in Abuja between the leadership of the Action Congress of Nigeria, ACN, and the Congress for Progressive Change, CPC, to forge an alliance and produce a single presidential candidate to confront incumbent Goodluck Jonathan, candidate of the Peopleâ€™s Democratic Party, PDP, in Saturdayâ€™s presidential election, have collapsed.

Chairman of the ACN, Chief Bisi Akande formally this afternoon announced the termination of the merger talks at a press conference in Abuja. The announcement must have offered some relief to the PDP as its candidate gets set to confront his weakened rivals in Saturdayâ€™s presidential election.

“We regret to announce that such talks have not led to any such alliance,” said Bisi Akande, chairman of the Action Congress of Nigeria party, which is strong in Nigeria’s southwest, where the economic capital Lagos is located.

“In the overall interest of the parties involved, our democracy as well as our country, it is better for each of the parties to go into the presidential election on its own platform.”
Akande said the situation could change if Saturday’s election results in a runoff.

His party had held talks with ex-military ruler Muhammadu Buhari’s Congress for Progressive Change, which has made inroads in the north. Buhari was seen as the main challenger to Jonathan before the parliamentary poll last week. But the Action Congress proved to be stronger party than the CPC, coming a distant second to the PDP and winning seats in more geographical areas than the CPC and the other opposition party, the All Nigeria People’s Party.

The ACN’s presidential candidate is Nuhu Ribadu, the former head of Nigeria’s anti-corruption agency, the Economic and Financial Crimes Commission.

The hopelessness of the discussions became clear last night when the two presidential candidates, Mallam Nuhu Ribadu of the ACN and General Muhammadu Buhari of the CPC, refused to step down for each other. Pressure was mounted on Ribadu, being the younger candidate, to step down for Buhari, 69, running for the presidency for the third time, since 2003.

Both presidential candidates are presently trailing President Goodluck Jonathan of the PDP in national polls conducted by various bodies in the country and going by the results of the parliamentary elections. The large support enjoyed by the ruling PDP across the country was reflected in the results of the National Assembly election held last Saturday where the party won 59 senatorial seats out of the 91 seats declared so far. ACN won in 13 senatorial districts across the country while the CPC won six.

The talks which continued this morning could not produce a consensus candidate as the parties maintained their hardline positions.

Sources at the meeting revealed that attempts to persuade the much older Buhari to step down for the younger Ribadu met a brickwall. Representatives of the CPC were said to have refused to continue with the meeting when it became clear that the ACN candidate will not step down. The ACN is also refusing to buy the alliance idea on the grounds of inadequacy of time to market a new candidacy to their supporters.

P.M.NEWS gathered that earlier deliberations by the parties at the meeting had concluded that the party which performed best during the National Assembly elections will produce the presidential candidate while the other will then tell its supporters to vote for the consensus candidate.

In this case, ACN which had more National Assembly members than Buhariâ€™s CPC was expected to produce the consensus candidate but representatives of Buhari reportedly backpedaled, insisting that the retired general should be the consensus candidate because he still has broad support in the North despite his partyâ€™s dismal performance during the National Assembly elections last Saturday.

The ACN representatives, it was learnt, were unhappy with the turn of events and decided that the parties should test their strength on the political turf.

Sources have explained why the alliance talks floundered, blaming it on the insincerity of the CPC leadership.

Our sources recalled how Buhari abandoned ACN after discussing with the party throughout 2005, to contest the 2007 elections on the platform of the All Nigeria Peopleâ€™s Party, ANPP.

ACN resumed discussion again with Buhari in October 2010 ahead of the present elections after Buhari was said to have personally visited Chief Akande at his Ogudu home in Lagos to discuss the need to work together.

As a result of this, ACN leadership set up a three-man committee comprising Eng. Rauf Aregbesola, Governor of Osun State, Dr. Kayode Fayemi, Governor of Ekiti State and former Governor of Ondo State, Mr. Niyi Adebayo to iron out areas of agreement with General Buhariâ€™s team.

The committee submitted its report on the 25th of October only to later discover to its amazement that the Buhari team had entered into an agreement with the International Centre for Reconstruction and Development, ICRD, a.k.a Save Nigeria Group and have resolved that the CPC will produce the President while SNG will produce the Vice President in an agreement that was witnessed and signed by Dr. Almajiri Geidam and Aminu Bello Masari for CPC and Dr. Gbolahan B. Bakare and Yinka Odumakin for SNG.

On 14 December, 2010, ACN leadership sent a letter to the National Chairman of CPC, Prince Tony Momoh and copied Buhari. The letter reads: â€œYou will recall the visit of General Muhammadu Buhari to my house (Chief Akande) in Lagos sometime in September this year (2010). This necessitated the need for the two parties to come together under a common platform for the purpose of 2011 general elections. The most recent of these efforts was the ACN Otunba Niyi Adebayo-led team and CPC Hon. Aminu Masari-led team, which had its first meeting in Abuja on Tuesday October, 5, 2010.

â€œSince then, not much has happened. To be sure, for the last two months now, we have not heard from you. Recently, we have read so much on this important issue on the pages of newspapers only. This is, to say the least, intriguing, particularly now that General Muhammadu Buhari has declared his presidential bid under the CPC.

â€œConsidering that there is hardly any time left, given the INEC timetable and the statutory requirement for any form of fusion of the parties, Nigerians cannot continue to wait forever. Therefore, if by the 31st of December, 2010 we do not hear further from you, it will be safe for us to conclude that you are no longer interested in pursuing these talks to logical conclusion.â€

Despite the collapse of the alliance, Buhari has declared that he would still win the presidential poll without the support of the ACN.

Speaking with P.M.NEWS this morning through his spokesman, Mr. Yinka Odumakin, Buhari alleged that the PDP rigged last Saturdayâ€™s polls and that things would be different this time around.

According to Odumakin, despite the fact that the CPC won inside Aso Rock, the PDP went to the remote areas to rig the elections in several areas across the country.

â€œOur chances are bright. We have massive support from the people. The PDP won last Saturday because they manipulated the results of the elections to suit their purposes.

â€œWith or without the alliance with the ACN, the trend of next Saturdayâ€™s election will be different,â€ he said.

P.M.NEWS also gathered this morning that following the collapse of the talks between the CPC and ACN, President Goodluck Jonathan has initiated a rapproachement with the leaders of ACN to shore up his support in the Southwest region which is now firmly under ACN control.

Jonathan, P.M.NEWS gathered, met with the leadership of the ACN in Abuja yesterday to solicit their support. At the meeting were former Governor of Lagos State, Asiwaju Bola Tinubu; the incumbent, Babatunde Fashola and other leaders of the ACN.

A top source in ACN told P.M.NEWS this morning: â€œOur leaders are meeting with Jonathan to see whether the party could support the president to win the presidential election on Saturday.

â€œWhatever be the case, by tomorrow, everything must be over and we should know the area we are heading to,â€ he stated.