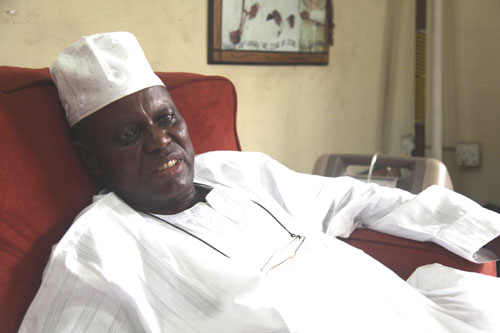 The Olu of Agege, Oba Lateef Atanda Adams Akinsosonyin 1, who joined his ancestors on Tuesday, has been buried according to Islamic rites.

He was buried yesterday evening in his palace at Osobu street Agege.

The entire Agege community was thrown into mourning on Tuesday when news of the death of the Oba spread throughout the town.

A statement signed by the Chairman of Agege Local Government, Alhaji Jubreel Abdul Kareem, disclosed that the monarch passed on in the early hours of Tuesday, 19 April, 2011 in his palace after a brief illness. He was 67.

Born in 1943, the late monarch served in the Nigerian Army and fought during the Nigerian Civil War, after which he retired voluntarily and went into business.

He was also an active politician before becoming the traditional ruler. He was a member of the defunct Unity Party of Nigeria, UPN.

The late traditional ruler also joined the Social Democratic Party, SDP. He contested and won election into the Lagos State House of Assembly on the platform of the United Nigerian Congress Party, UNCP.

In 2001, he was installed the Olu of Agege Kingdom by former Governor Bola Ahmed Tinubu.

A progressive till death, Oba Akinsosonyin, a first class traditional ruler in the state, was a peacemaker and his reign brought peace to Agege.

He is survived by his wife, Olori Fausat Folashade Adams, children and grandchildren.