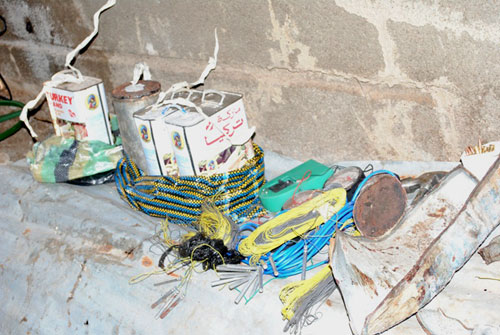 SUSPECTED EXPLOSIVES DISCOVERED BY THE POLICE.

The Police in Kaduna have announced the discovery of more bombs, capable of causing great damage, in the city recovering from two days of post election violence.

According to the police spokesman, the anti bomb squad deployed to the area of the city, where a bomb exploded yesterday killing two of his owners, found locally made bombs in vegetable oil gallons and in a steel casing.

Two persons suspected to be manufacturers of local bombs died yesterday Friday in Kaduna after they were trying to move some of the manufactured explosives from the place of production to a house near the Kaduna legislative quarters, Rafin-Guza in Kawo area, Kaduna.

An eye witness who identified himself as Musa Suleiman told P.M.News that the bomb blast occurred near the Legislators Quarters between 6.30am and 7pm when Muslims were preparing to go for the evening prayer. The explosion threw the entire locality into confusion.

P.M.News also gathred that the Police and Airforce patrol teams who raced to the scene arrested three other suspects at the 5, Matazu Road Kawo Kaduna, where the blast occurred inside the property of one Abdullahi Dan-Ama , behind a filling station.

The Police Public Relation Officer, Aminu Lawan who confirmed the arrest of the three suspects said they were arrested at the scene of the blast. He disclosed that the three sustained serious injuries as a result of the blast.

Meanwhile, the Police Commissioner Haruna John at a press conference told newsmen that the calibre of explosives discovered at the scene are capable of causing massive destruction.

He assured the public that the police will continue to ensure safety of lives and property in the state and urged everyone to shun statements capable of incitement.