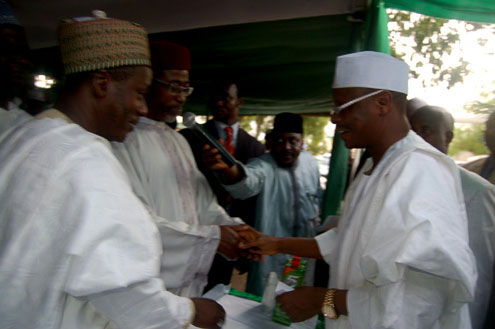 Kano state governor-elect, Engr. Rabiu Musa Kwankwaso and others elected into public offices in the just concluded general elections received their Certificates of Return from the Independent National Electoral Commission in Kano, North-West Nigeria, this evening.

The governor-elect and his deputy, Umar Ganduje, three senators-elect, 24 House of Representatives members-elect and 40 state House of Assembly members-elect participated in the elaborate ceremony organized by Kano state INEC.

Kwankwaso during his speech at the occasion reiterated his resolve to build a new Kano where youth restiveness and unemployment would be a thing of the past.

He also promised to ensure free-feeding, free-uniform as well as free education for primary school children, adding that in his administration the trauma being experienced by pregnant women would be a thing of the past.

â€œI want to use this opportunity to thank the people of Kano for their love and solidarity they have been showing since we indicated interest to run up to this moment of our victory, and I promise not to disappoint them,â€ he added.

The Representative of the INEC National Chairman, Professor Attahiru Jega, Amb. Mohammed Ahmed Wali, who is the Supervisory National Commissioner in charge of North West, described the occasion as historic, stating that the conduct of the April general elections in compliance with Section 75 of the Electoral Act of 2011, as amended, has won goodwill and accolades for INEC both at home and abroad.

The Kano State Resident Electoral Commissioner Alhaji Abdullahi Umar Danyaya in an address of welcome, commended all stakeholders for their immense contributions towards the successful conduct of the April general elections

â€œWe have gone through rough waters, but today, we have arrived. So I want to thank all the stakeholders, including the Vice Chancellor and staff of Bayero University, the National who practically became INEC staff, the security agencies and the press.â€

Senator Kabiru Ibrahim Gaya, who spoke on behalf of the three Senators-elect urged the Governor-elect to run an all inclusive government that would re-launch Kano on the path of rapid socio-economic development.
ByÂ Maduabuchi Nmeribeh/Kano