EFCC After Daniel, Akala, 7 Others 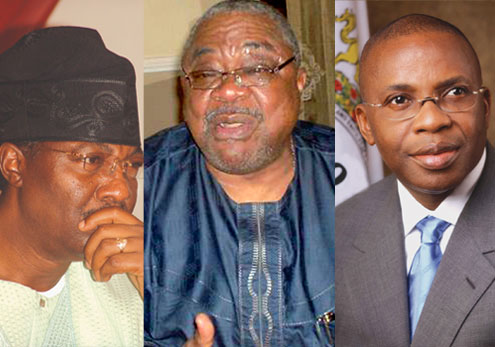 (From left) Daniel, Akala and Ohakim

Immunity clause may have prevented the long arm of the law from encircling them but that will soon be over for nine outgoing state governors across Nigeria.

Sources at the Economic and Financial Crimes Commission, EFCC told P.M.NEWS this morning that the anti-graft agency is going after the nine state governors it perceives have cases to answer over how they spent the billions of naira allocated to their states throughout their tenure.

According to our sources, loads of petitions against the nine governors are now with the EFCC and in a matter of days the governors will be made to account for their deeds as the commission says it has begun to investigate them.

The nine outgoing governors, according to P.M.NEWS findings, are Gbenga Daniel of Ogun State, Adebayo Alao-Akala of Oyo State, Bukola Saraki of Kwara State and Ikedi Ohakim of Imo State.

On 29 May, precisely 19 days from today, these governors will lose their immunity as none of them will return to office, having either completed their two terms in office or lost their re-election bid in last monthâ€™s governorship election.

P.M.NEWS gathered that one of the petitions sent to EFCC against Akwe Doma, the outgoing Nassarawa state governor, was written by Alhaji Ibrahim Shekarau Musa, Secretary of the Congress for Progressive Change, CPC, in Nasarawa State.

In the petition, Alhaji Musa alleged that Akwe Domaâ€™s son, Umar, is one of the fronts the governor is using to siphon money to the tune of N9 billion.

It was also alleged that the stateâ€™s Ministry of Water Resources raised the sum of N900 million through a backdated memo for the purported supply of chemicals.

The Ministry of Housing and Health were also allegedly ordered to raise N200 million and N340 million through a fictitious backdated memo for the construction of the Banquet Hall of Government House.

It was further alleged in the petition that a backdated memo was used to raise an additional N68 million to cover the cost of accommodation for pilgrims participating in this yearâ€™s Hajj operation.

EFCC has already moved to Nassarawa state as well as the other 8 states whose governors are under probe.

Ibori is also currently facing trial in the United Kingdom after he was extradited from Dubai to face money laundering charges.

His wife, sister and associate have been jailed for the same offence in UK.

EFCC operatives had tried to arrest Ibori last year but he escaped to Dubai where he was eventually arrested and extradited to the UK.