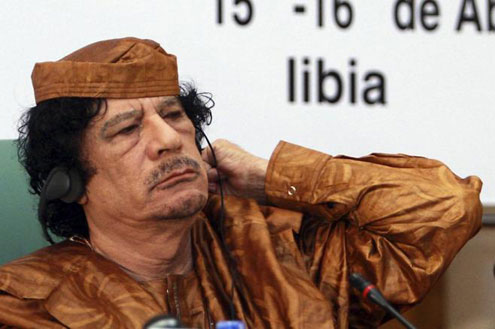 The International Criminal Court prosecutor asked judges Monday to issue arrest warrants for Libyan leader Moammar Gadhafi and two other senior members of his regime, accusing them of committing crimes against humanity by targeting civilians in a crackdown against rebels, according to reports by Reuters.

Judges must now evaluate the evidence before deciding whether to confirm the charges and issue international arrest warrants.

“The case is now in their hands,” Moreno-Ocampo told reporters at a press conference.

The warrants are not expected to have any immediate impact on the war in Libya, but they could make it harder for their targets to end the conflict by going into exile. Because the Security Council ordered the ICC investigation, all U.N. member states would be obliged to arrest him if he ventures into their territory.

Moreno-Ocampo said he had evidence of Gadhafi issuing orders, his son organizing the recruitment of mercenaries and of Al-Sanousi’s direct involvement in attacks on demonstrators.

Moreno-Ocampo said that the persecution is continuing in areas under Gadhafi’s control.

“Gaddafi’s forces prepare lists with names of alleged dissidents. They are being arrested, put into prisons in Tripoli, tortured and made to disappear,” he said.

Moreno-Ocampo said he was continuing investigations into allegations of mass rapes and war crimes “committed by different parties during the armed conflict” and attacks on sub-Saharan Africans wrongly perceived to be mercenaries.

“There will be no impunity for such crimes in Libya,” said the Prosecutor.

Moreno-Ocampo says his team has gathered so much evidence that he is almost ready to go to trial.

Even if Gadhafi flees Libya, some nations have refused to act on arrest warrants. Three countries have let Sudanese President Omar al-Bashir visit without arresting him. Al-Bashir has been indicted for crimes including genocide in Darfur in the only other International Criminal Court case ordered by the Security Council.

The Libyan conflict appears largely stalemated, with each side claiming gains one day, only to be turned back the next, despite NATO air strikes aimed at supporting rebels. Gadhafi has vowed to fight to the death.

The head of Britain’s armed forces, Gen. David Richards, in remarks published in The Sunday Telegraph in London, urged NATO to widen the range of targets the alliance’s planes are allowed to hit in the effort to stymie the Gadhafi’s regime’s attacks on protesters.

Richards declared that “more intense military action” was needed or the conflict could end in stalemate.