WAFU Cup In Eye Of The Storm 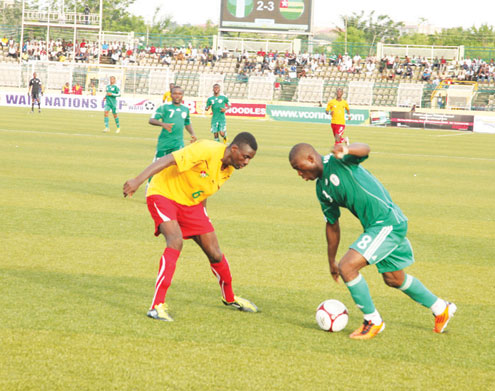 There are strong indications that the West African Football Union, WAFU, is facing a tough time in its existance.

After a successful organisation of the 2nd WAFU Nations Cup hosted by the Ogun State government at the MKO Abiola Stadium, Abeokuta, a shocking news came from the headquarters of the Confederation of African Football, CAF, that the regional football body has been disbanded.

The unfortunate decision was taken at the CAF Executive Committee meeting in Cairo on Monday. A statement emanating from the meeting said that the move to disband WAFU was being made “considering the organisational issues that face the body” and that the region would be divided into two.

WAFU was being run by an interim committee, led by Ghana’s FA President Kwesi Nyantakyi, pending CAF’s review of the regional bodies.

The previous president of WAFU, Amos Adamu of Nigeria, is appealing against a three-year suspension from football for allegedly seeking bribes during 2018 and 2022 World Cup bidding. The WAFU Cup has just been completed in Abeokuta in Nigeria, where the hosts were beaten in the final by Togo.

The eight-team tournament had been hit by its own organisational problems – with three teams failing to show up.

The WAFU Cup is a tournament contested by representatives of the countries in the region. It started in 1974, fashioned in line with the African Nations Cup, to bring about regional football competition within the western part of Africa.The first trophy was commissioned by President Gnassingbe Eyadema of Togo in 1974. The affiliated West Africa nations are Benin, Burkina Faso, Cape Verde, Cote d’Ivoire,Gambia,Ghana, Guinea, Guinea Bissau, Liberia, Mali, Mauritania, Niger, Nigeria, Senegal, Sierrra Leone and Togo.

The inaugural tournament was hosted by Ivory Coast and won by the host nation. Unfortunately, the WAFU Cup stopped for three years before ECOWAS was introduced as a biannual cup till 1991.

WAFU Nations Cup returned in 2002 as WAFU Cup. It only lasted for two games due to the violence that broke out in Cote dâ€™Ivoire, the host country.

The tournament returned in April, 2010 after 19 years.

Nigeriaâ€™s Ogun State hosted it with eight participating countries that include Burkina Faso,Ghana, Senegal, Benin, Liberia,Togo, Guinea and the Super Eagles of Nigeria .

The one-week long competition was held at Ijebu Ode Stadium and the M.K.O Abiola International Stadium in Abeokuta. It was declared open by the sport-loving governor of the state, Gbenga Daniel.The home- based Super Eagles of Nigeria defeated the Teranga Lions of Senegal in the final by 2-0.

Nigeria was called upon once again to host the 20011 edition. The Ogun State government organised the tournament, making it the second time in a row.

The competition was was billed to feature eight countries within the West African region namely,the Teranga Lions of Senagal, Hawks of Togo, Liberia, Niger, Black Stars of Ghana, Elephant of Cote d’Ivoire, Taifa Stars of Tanzania as guest and the Super Eagles of Nigeria.

This year’s tournament was marred by the late withdrawal of three participating countries (Senegal, Mali and Tanzania) which cited logistic problems.

The late withdrawals, forced the organisers to group the five remaining participants countries into two. Group A consists of Nigeria,Liberia and Niger. Group B ended up with only the Hawks of Togo and the Black stars of Ghana.