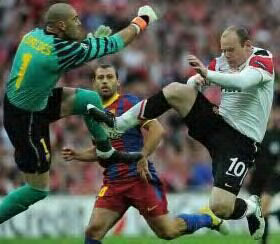 Wayne Rooney of United (right) fight for the ball with Barca keeper during today's final match at Wembley stadium.

Barcelona confirmed their place in the pantheon of football’s greatest sides this evening, outclassing Manchester United 3-1 at Wembley to claim their second Champions League crown in three years.

Goals from Pedro, Lionel Messi and David Villa secured a deserved victory for the Catalan magicians after England international Wayne Rooney had raised United’s hopes with a well-taken first-half equaliser.

The star of an electrifying team performance was Argentinian striker Messi, the 23-year-old maestro whose brilliant effort on 54 minutes saw him equal Ruud van Nistelrooy’s record of 12 goals in a single Champions League campaign.

It also took Messi’s tally for the season to an astonishing 56 goals in 62 games for club and country, and propelled Barcelona towards their fourth victory in club football’s most prestigious competition.

Sir Alex Ferguson’s United had been determined to avoid a repeat of the 2009 final in Rome, where Pep Guardiola’s side had struck early before going on to clinch a 2-0 win at the Stadio Olimpico.

Yet despite a bright opening United were ultimately handed a defeat that was just as emphatic as their loss two years ago, with the Spanish champions revelling in the wide open spaces of Wembley.