Ajimobi Promises Restoration As He Takes Oath Of Office 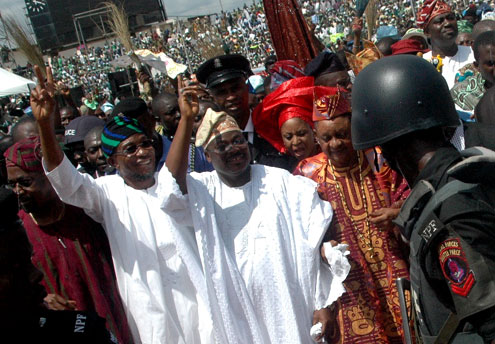 Ex-Oyo State Governor, Adebayo Alao-Akala left Ibadan, the capital of Oyo State, Southwest Nigeria as Senator Abiola Ajimobi, the new state governor promised a holistic restoration and transformation of all the facets of governance in the state.

However, former Governor of Lagos State, Asiwaju Bola Ahmed Tinubu referred to the handover note Akala left behind as a pack of lies, stressing that the crisis Akala left behind could not be unimaginable problems.

Tinubu, who likened Akala to a pig who suddenly found himself amid civilisation and thought that he is in a zoo said that he could not wait behind to personally hand over to Ajimobi because he knew that what he wrote in the handover note are lies.

He blasted the ex-governor for lacking vision which according to him impeded him from delivering democracy dividends to the people of Oyo State, stressing that he was one of the worst things that happened to Oyo State.

Tinubu said that he could not be happier than standing in Ibadan today and welcome new hope, vision and beginning of a dream come true.

He said that he was happy that the prophecy he made during the launch of Olubadan’s book that he would flush Akala out of government house has come true.

Ajimobi, who was sworn in today around 12:30pm by the Chief Justice of the state, Bolajoko Adeniji, at the Obafemi Awolowo Stadium (formerly Liberty Stadium) regretted that all great achievements of the first premier of the old western region, Obafemi Awolowo, which were the pride of the region, have been left in ruins by the successive conservative regimes in the state.

He, however, submitted that only the governments of Bola Ige and Lam Adesina have been able to sustain the legacy.

The governor promised that his government will be guided by the manifesto of the Action Congress of Nigeria (ACN), under whose platform he won election to the seat last month.

Ajimobi further lamented the level of secrecy the government of the immediate past governor has subjected public information to, accusing the system of making itself a stumbling block to access to vital information on the true state of the affairs of the â€˜pacesetter state.â€™

According to him, â€œAs I speak, we do not know the state of health, the colour, complexion or the contours that shape the account of our beloved state. Is our patrimony, our treasury, in the red or in active health? We do not know the number of commitments that our precious state has been held by the neck to sustain. We do not know the exact number of teachers, students or government commitment to these sectors. But, I ask, should government business be shrouded in such secrecy?

The out-gone government, in defiance of time-worn norms and conventions, completely shrouded from our view the number of medical doctors that still remain in the service of the state and why they have been on a needless strike in the last six months. We do not know the number of projects the government is executing, how much the insufferable tax payers dole out monthly to defray the cost of these projects. My people, I ask, should government business be shrouded in such secrecy?â€

Rolling out the six-point agenda of his government, Senator Ajimobi, informed that his administration would focus on free and qualitative education; accessible and suitable health care for all but free for children and aged; rehabilitation and provision of public infrastructure; provision of security of lives and property; rural development and integration; as well as collaboration with other arms of government for effective delivery of dividends of democracy to the people of the state.

He also promised to revolutionalise the civil service to make its running ICT-compliant.

The swearing in ceremony was witnessed by a large crowd which filled the stadium beyond capacity.

Apart from monarchs from across the state, who were present at the venue, the governors of Osun and Ekiti states, Ogbeni Rauf Aregbesola and Kayode Fayemi, were on hand to welcome Ajimobi to their camp.