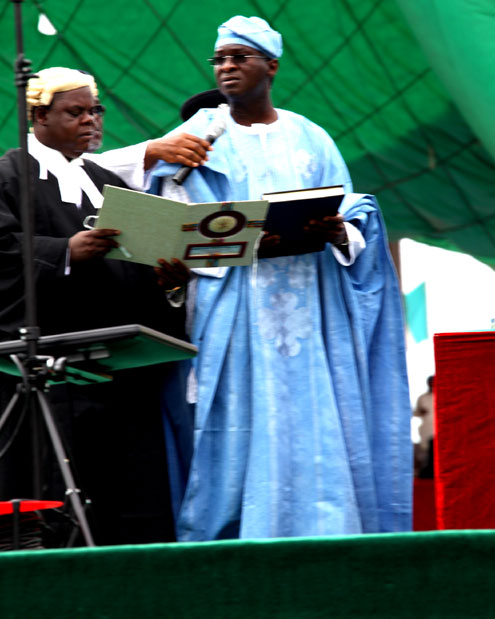 Lagos State Governor, Mr. Babatundde Fashola SAN (right) taking his Oath of Office during the inauguration and swearing-in ceremony of the Governor for a second term in office and Mrs Adejoke Orelope-Adefulire as the Deputy Governor of Lagos State at Tafawa Balewa Square (TBS), Onikan, Lagos on Sunday, May 29, 2011.

Amidst colour and style, Lagos State Governor, Mr. Babatunde Fashola (SAN), Sunday took the Oath of Office to begin his second tenure just as he pledged his commitment to do his best to remain worthy of the mandate of the people of Lagos.

In his inaugural speech after the swearing in ceremony, Governor Fashola, who described the mandate as a support for the continuation of good governance in the State, also promised that the people-oriented programmes and policies of his administration would continue to move the State to a brighter rewarding future.

â€œI understand the import of the mandate. Let me assure you all that as leader of the government team, I cherish the mandate; I am fully conscious of the import for your hopes and aspirations and I remain as committed as I was in 2007 to fulfill those aspirationsâ€, the Governor said.

The oath taking, a requirement of the Nigerian constitution was performed by the Chief Judge of the State, Hon. Justice Inumidun Akande. The chief judge also administered the oath on the new Deputy Governor of the State, Princess Adejoke Orelope-Adefulire, at the Tafawa Balewa Square in Central Lagos.

Fashola recalled that at the inception of his administration in 2007, it was committed to one philosophy, Eko o ni baje. â€œToday, I stand before you, extremely humbled by your support, your sacrifice and your unwavering commitment for four years, but equally very proud to assert that we have delivered on our promises to you and exceeded them in many instances. â€œIn 2007, very few of us were known to you. But today, we have become like goldfish. We have no hiding place.

We understand that you will not settle for less and we are committed to giving you nothing but the bestâ€. the Governor further said adding that in the new dispensation his administration would continue to keep its electoral promises in terms of development in all sectors of the economy.

Governor Fashola however, called for compliance to the rules and regulations guiding the relationship between government and citizens pointing out that the achievements of his administration in the last four years were largely as a result of total commitment to law and order. â€œAs I make this solemn pledge before you all and before God, let me remind all of us that the progress we have made was not made by me alone. Every law abiding Lagosian was a contributor.

We achieved this progress by building a Government whose commitment to law and order was unmistakable and unequivocal. We will require an even greater commitment to law and order, not only to sustain what we have achieved, but also to progress upon itâ€, the Governor said Continuing Governor Fashola declared: â€œ As a Government, our task in meeting your expectations will certainly be made more easy if we all submit ourselves equally to the rules and regulations of our daily interactions and businesses, because not only will voluntary compliance reduce our cost of enforcement and citizensâ€™ contact with law enforcement agents, it will leave your Government with more time and resources to focus on developmental issues that improves our lives collectively; a lawful and orderly society will certainly benefit more peopleâ€.

â€œThe truth is that where there is disorder only a few who operate outside the law benefit and where there is order, not only is there hope and lawful expectation of benefit, the lesson of history is that many more people find an opportunity for benefit and the realization of their expectationâ€, the Governor said adding, â€œIt therefore becomes inevitable for me to renew my commitment to law and order as the most important pre-condition for the achievement of all our aims and aspirationsâ€.

Disclosing his administrationâ€™s intention to commit more resources to security and safety to further reduce crime, the Governor, who promised to be â€œfair, firm and uncompromising in enforcing the lawsâ€, declared, â€œIf we must equal and exceed the standards of those societies by whose performance we assess ourselves, and I am certain that we can, then we must all reach a consensus from today to play by the rules, such as paying our taxes, driving in the proper way and on the proper lanes, trading in the proper and designated places, building only in proper and designated places and doing everything in accordance with the rules.

As a Government, our task in meeting your expectations will certainly be made more easy if we all submit ourselves equally to the rules and regulations of our daily interactions and businesses, because not only will voluntary compliance reduce our cost of enforcement and citizensâ€™ contact with law enforcement agents, it will leave your Government with more time and resources to focus on developmental issues that improves our lives collectively; a lawful and orderly society will certainly benefit more people.

The Governor was certain that his administration would continue to run an all inclusive government where the aspirations of every sector would be accommodated adding, however, that it would seek to balance this with the enormous cost of running a large Government. â€œOur policies and programmes have never sought and will not seek to discriminate against any personâ€, he pledged.

Reiterating the need for the sustenance of law and order in the State, Governor Fashola said there are enormous opportunities that lie in such sustenance adding that â€œthe increasing positive local and international reviews that the State has been receiving and the contacts and enquiries that he has been receiving from within and outside Nigeriaâ€ point to an increasing excitement and interest about and in the possibilities of Lagos and Nigeria. â€œIt is therefore in our collective hands to reap the benefits that lie ahead by working together peacefully and using our enormous diversity as the strongest assets for achieving our prosperityâ€, Governor Fashola said.

On the problems that face the State such as youth unemployment, bad roads and others, Governor Fashola said his administration would continue to be innovative and ready to evolve and expand policies like the Agriculture Youth Empowerment Scheme, the Lagos Ignite Programme, Technical and Vocational education, and the Stateâ€™s skill acquisition and microfinance schemes adding â€œour Government sees the unemployment of young people as a challenge to be addressed and not as a license for young people to take to crime or to act outside the lawâ€.

â€œOur State, as small as it is in land area, is home to the fifth largest economy in Africa, ranking after four African countries including our country, Nigeria, and certainly second to no sub-national Government on this continentâ€, the Governor said adding, â€œClearly, therefore, if we are patient and manage our assets and resources properly there will be enough for everybodyâ€. Acknowledging that as an organ run by humans the administration would have its limitations resulting in the inability sometimes to foresee and accurately predict the ramifications of the implementation of some of its policies and programmes, Governor Fashola pleaded with the people to see such as honest efforts of Government to make things better.

â€œWhenever these policies occasion discomfort, I appeal to you to see them as sincere efforts to make things better and urge you to bring forward your complaints for any redress that may be possible without seeking to take the laws into your own hands or interpreting those policies as being specifically targeted at any group. That is not our wayâ€, he urged pointing out that the administrationâ€™s decision making process has always and will remain driven by the consideration of what gives the greatest good to the greatest possible number of our people.

Pointing out that the cost of running Government, has escalated as a result of upward reviews of wages of staff across sectors, the Governor declared, â€œWhile I am pleased that we made those investments in our public service and expect that they will reward you the tax payers with improved productivity and even better service delivery; our revenues have unfortunately not grown in such proportions and it therefore suggests that we will have less to spend on capital projects until we find other sources of revenue generationsâ€.

He appealed to the people to be patient with the Government adding that while it acknowledges that many roads have been built, the administration is conscious of the fact that there are areas yet to be reached promising that as many as it can fund will be made motorable soon â€œThe same commitment applies to our school programmes, our healthcare programmes, street lighting, water supply, property registration, market development, drainage construction and canal clearing to mention but a few. â€œ

â€œThanking the people of Lagos for their support â€œand the very overwhelming mandate you have handed to usâ€, Governor Fashola said â€œwe accept it with all the responsibilities that it bringsâ€ adding that â€œwhen the new Government settles down, more detailed pronouncements on policies in the aforementioned areas and those that may have been omitted, would be announced and implemented.

He noted that â€œlike in the first term, I will do my best, with your support and co-operation to keep my electoral promises to you with regards to consolidating on the gains of the last few years, accelerating and hopefully expanding and completing existing projects like the Eti-Osa-Lekki-Epe Expressway, the Lekki Free Trade Zone, the Lagos Badagry Expressway, the Lagos Light Rail Project, and many other roads projects, while we expect to increase the reach of the BRT and the ferry services as our major jetties reach completion stageâ€.

â€œThe accessible and affordable housing and market schemes driven by reasonable mortgage tenures, the expansion of access to potable water supply, and waste water and sewage treatment will be at the forefront of our developmental and budgeting initiatives,â€ the Governor said. Earlier in his welcome address, the Head of Service, Prince Adesegun Ogunlewe had congratulated the people of Lagos for making a convincing statement with their votes as the Action Congress of Nigeria Governorship candidate Mr Babatunde Fashola (SAN) recorded the largest number of votes nationwide.

He said Lagos State has in the last four years been lucky to have at the saddle a Governor who is committed to poverty eradication and sustainable economic growth. He added that his policies and programmes have made him and the administration in Lagos State a reference point of good governance which has attracted international accolades.