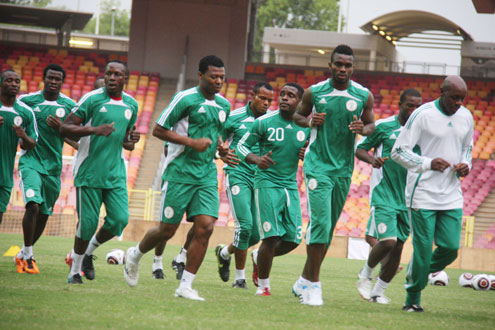 The absence of Argentinaâ€™s Lionel Messi in tomorrowâ€™s international friendly match against the Super Eagles is a big relief for the Chief Coach of the Nigerian side, Samson Siasia.

Speaking at the world press conference held by the organisers of the friendly tie for the Nigerian team and their Argentine counterparts at the Transcorp Hilton Hotel, Abuja early today, Saisa said the fear of the FC Barcelona of Spain star has been the beginning of wisdom for him since he heard that the Eagles would play Argentina.

According to him, â€œArgentina have been a torn in our flesh in past encounters. I could remember that though I scored against Argentina in the 1994 World Cup in USA, the Argentine went ahead to beat Nigeria 2-1 in the match.

â€œAs a coach, I lost to Argentina in the final of the FIFA World Youth Championship, WYC at the Holland 2005. Messi was the one who wrecked my team then. Messi also contributed to our loss at the final of the football event of the Beijing Olympic Games in China. Tomorrowâ€™s international friendly will be the fourth time I will be facing Argentina and I will like to say that the absence of Messi is a big relief for me. But I will like my team to play well because Nigerians want to see them playing good football in the match tomorrow.â€

Meanwhile, Real Zaragoza of Spain forward, Ikechukwu Uche, Everton of England forward, Victor Anichebe and other Super Eagles were a delight to watch as they thrilled Abuja fans, who came to watch the teamâ€™s last night as they began preparation for tomorrowâ€™s international friendly against Argentina and their 5 June Nations Cup qualifier against the Walya Antelopes of Ethiopia in Addis Ababa.

The team, which had their first training session yesterday under the watchful eyes of the technical crew, led by Coach Samson Siasia, sent the fans, who were allowed to watch their training session into ecstasy.

Ikechukwu, the younger of the Uche brothers stole the show as he kept finding the back of the net at will against goalkeeper, Vincent Enyeama, who just signed for Ligue 1 champions, Lille, while Anichebe also made mince meat of Hapoel Petah Tikva, Israel goalkeeper, even if it was a training session.

While the duo had a field day, other strikers in the team, Fernebache of Turkey’s new signing, Emmanuel Emenike and Warri Wolvesâ€™ goal poacher, Ehigbo Ehiosun also gave the fans something to cheer.

Although the training session kicked off at about 5:30 p.m, the fans were already on ground eagerly waiting to see their stars, who they used to watch on satellite television playing for their clubs abroad.

It was cheers all the way during the training. At the end of the trainning session P.M. Sports cornered some of the players, who they spoke on their expectations ahead of the match, which some soccer fans have tagged â€œrevenge missionâ€ because of the 0-1 loss suffered in the hands of the South Americans at the South Africa 2010 World Cup.

Uche, who is fondly called â€œThe Chiefâ€ said he hopes his goal scoring form during training could translate into real goals tomorrow. â€œIâ€™m really delighted to be scoring tonight (yesterday) and I would like to score against Argentina,â€ he said.

For Enyeama, who denied the Argentines the opportunity of scoring many goals at the World Cup last year, â€œit would be a delight to stand between the post against Argentina tomorrow.â€ West Ham Unitedâ€™s Obinna Nsofor also believes tomorrowâ€™s match would be a good test for the team.

Meanwhile, it appears Manisaspor of Turkey striker, Isaac Promise, is ready to silence his critics, who had questioned the decision of the technical crew to invite him judging by his performance in training last night.