Odibie Sure Of Nigeria's Progress 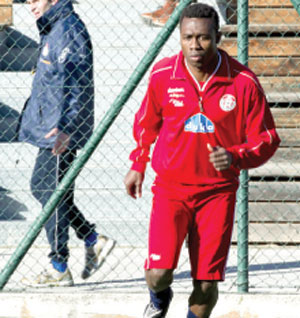 The Super Eagles of Nigeria may be in a precarious situation with the 2-2 draw recorded on Sunday in a 2012 Nations Cup qualifying match against the Wayla Antelopes of Ethiopia but one man, Michael Odibe is upbeat about the teamâ€™s chances of making the biennial tournament.

Odibe made his debut for Nigeria at the national level in an international friendly against the Leone Stars of Sierra Leone at the Teslim Balogun Stadium, Surulere, Lagos, Nigeria but he is yet to get an international call up to the national team, yet he is optimistic that the Coach Samson Siasia led technical crew can make the journey to Gabon/Equatorial Guinea 2012.

The 23-year old defender, who partnered well with skipper of the team, Fernebache of Turkeyâ€™s Joseph Yobo during the international friendly match hinged his optimism on so many reasons. He believes that Nigerian footballers strive well when under pressure. He went down memory to the qualifying series, where the Super Eagles under Coach Shuaib Amodu had to wait until the last minute before they qualified for the first Senior World Cup to be ever hosted on African soil, South Africa 2010.

Odibe said Nigerians were justified to sulk over the 2-2 draw the Eagles played against Ethiopia but that they should look at the better side of life because, whenever any team wants to play the Super Eagles they always play as if their existence depends on the outcome of the encounter.

According to him â€œThere are no longer minnows in football, every country wants to make a name in the sport and they believe the best way to that is to defeat the Super Eagles, who to many are the superpower of football on the African ontinentâ€.

Although he is yet to be a regular starter for the team, the Italy-based defender disclosed that he always supports the team with prayers and makes it a point of duty to always follow the teamâ€™s matches.

After being dropped from the final list for the World Cup, Odibe did not look back but he rather increased his training, believing that his time to play for the national team would definitely come.