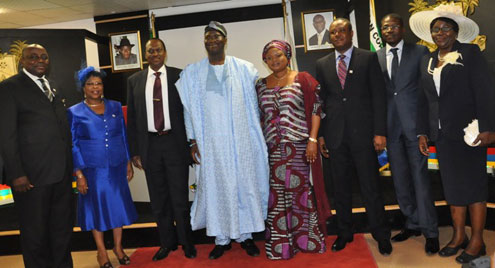 Lagos State Governor, Mr Babatunde Fashola (SAN) on Thursday presided as oaths of office were administered on five new Permanent Secretaries, tasking them to contribute towards making the State Public service the best in the continent.

Governor Fashola who spoke at the Conference Room of the Lagos House, Alausa added that it is not enough for the Lagos public service to be the model for the nation but every member should aspire to make it the best in Africa.

He urged them all to roll up their sleeves and be ready to contribute their quota to ensure that qualitative service is delivered to Lagosians as the expectation is very high.

While congratulating them for acquitting themselves very creditably in the examinations which they wrote prior to the appointments, the Governor said the five appointees got the jobs because they deserved to be there.

While wishing them the very best of luck in their new positions, Governor Fashola said they are welcome to a life of hardwork, service and total dedication to the cause of the people of Lagos.

The Governor reiterated that immediately after he assumed office for a second term he commissioned a team of poll experts to go back to the electorates to enquire about what they need from the Government.

He explained that the results of the polls have been turned in and that what the public expect from the State lawmakers formed the major component of his address to them when the seventh Assembly was inaugurated.

Governor Fashola said he expects that subsequent upon such workshops, the members of the Lagos Public service will offer solution to various problems brought forward by members of the public.

He added that now he expects that every memo would be treated with dispatch just as letters are quickly treated and phone calls replied in such a way that will make democracy very impactful.

He said if solutions are offered to the people, it will make the job easier and also facilitate a process by which the people can be connected with their government to make them understand that government feels their situation and is on top of it.

Governor Fashola said from now he expects the public servants to be proactive by not waiting for directives anymore and rather taking the bull by the horn by offering solutions in conjunction with political leaders, who would soon be appointed, to problems affecting members of the public.

Stressing that the common goal of every member of the public service should be how to ensure a reduction in the number of times people have to visit Alausa to get things done, Governor Fashola added that when this is done, it will help the government address the issue of transportation and traffic management. According to him, the fewer cars on the road, the better it would be for everyone.

The Governor promised to address the issues more at future retreats where he would have the opportunity of setting out clear goals and objectives by using the manifesto of the Action Congress of Nigeria and the 10 point Agenda of the administration as pointers.

Speaking earlier, the Head of Service, Prince Adesegun Ogunlewe had introduced each of the five new Permanent Secretaries and read their short bio data.

The ceremony was attended by the body of Permanent Secretaries and relatives of the appointees and other top government officials.