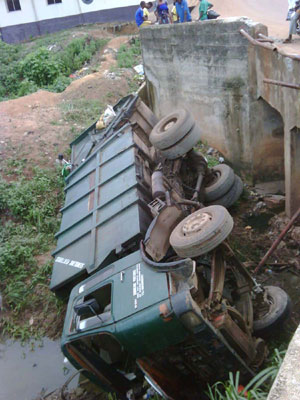 â€¢The truck driven by the late driver in the canal

The driver of a LAWMA PSP truck which plunged into the canal at Puposola/Adesola area, New Oko-Oba in Ifako-Ijaiye Local Government Area, Lagos State, Southwest Nigeria is dead.

The deceased whose identity is unknown, worked with Semolink Ventures, Fagba.

P.M.NEWS gathered that the driver died Thursday afternoon at an undisclosed hospital where he was rushed to after the incident on Wednesday.

Witnesses at the scene of the accident told P.M.NEWS that the truck lost control control in its bid to ascend the sloppy road before it plunged into the canal.

Investigations revealed further that the driver and his assistant were rushed to a nearby private hospital but the driver was later moved to another hospital because of the seriousness of his injury.

Commenting on the incident, a resident of the area, Mr. Alowonle Mohammed said a truck barrier was erected on the road to prevent accidents but the driver ignored it.

Mohammed appealed to the state government to find a way of lifting the truck from the canal without damaging the bridge, which he said was constructed three years ago.