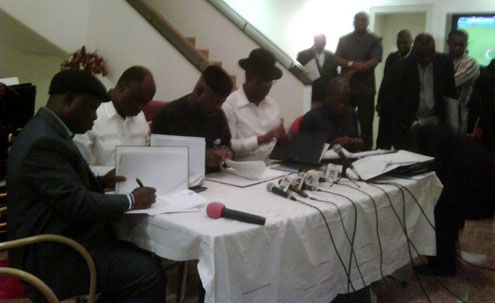 Governors of the South-South signing an agreement reached after their meeting in Govt House, Port Harcourt.

The meeting is being Presided over by Liyel Imoke, who is the Chairman of The South South Governor’s forum.

It was learnt that the kidnap of the five Corps members last week was on top of the agenda , as well as the issue of minimum wage.

The Director-General of NYSC Brig-General Ismaila Tsiga, briefly attended the meeting and left a few minutes but refused to speak with the press.