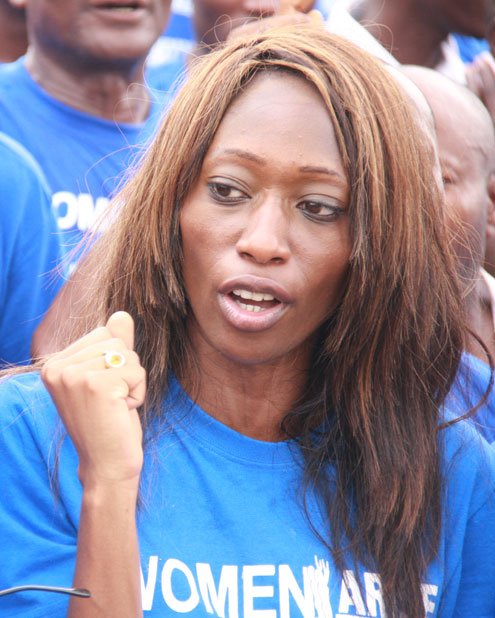 Eighteen years after, daughter of the winner of the 12 June, 1993 presidential election, Mrs. Hafsat Abiola-Costello says her father, the late Moshood Abiola and her mother Kudirat did not die in vain, saying that the nation is enjoying the democracy they fought for.

Abiola-Costello spoke with P.M.NEWS on phone from her base overseas, saying that her father and mother were true martyrs who fought to ensure that democracy reigns in the nation but lamented that those at the helm of affairs had refused to recognise this by plunging the nation into the abyss.

According to her, 18 years after, after June 12, the Federal Government had failed to address the issue of poverty which her father wanted to tackle before his election was annulled by the military.

She stated that her fatherâ€™s election was a miracle as support for him cut across every boundary, saying that Abiola had the primary aim of tackling poverty in the land, which she said had grown worse by the day.

â€œToday, the hope which Abiola promised Nigerians has not been restored. 18 years after, 70 percent of Nigerians still live with less than a dollar per day while 90 percent live with at least two dollars per day.

â€œThe failure to immortalise Abiola is a failure to the nation. The few cliques have refused to address the problem of poverty. These people have been taking the money of the nation outside to lodge to in foreign accounts.

â€œNigerians should demand that their government performs to their satisfaction. It is a shame that the masses are still hungry,â€ she stated.

Abiola-Costello added that instead of Nigerians asking that 12 June should be declared democracy day, the people should hold the government of the day accountable.

She advised that a 12 June movement should be set up, to hold the government accountable to fulfill the 12 June promises so that the masses could at least enjoy the dividends of democracy which they had craved for.

Abiola-Costello also said her greatest challenge so far is trying to come to terms with the lack of commitment by the Nigerian government to the populace, saying this was inexplicable.

â€œI am stunned by the lack of commitment by our leaders and the contempt they have for the Nigerian people. The hardest part of this is that some people died for this democracy.

â€œI donâ€™t understand what they are doing, even till now. Nigeria has a booming economy; we are wealthy but the leaders take us for a ride,â€ she lamented.

Meanwhile, over a thousand Nigerians, including Governor Babatunde Fashola, activists and prominent Nigerians gathered in Lagos, South West Nigeria to remember the late Moshood Abiola, the hero of the annulled 12 June, 1993 presidential election.

Itâ€™s been 18 years since former Military Head of State, General Ibrahim Babangida (retd.) annulled the freest election to be conducted in the history of the nation. Yesterday was 12 June and thousands of Nigerians gathered at the Lagos Television Ground to celebrate Abiola.

Speaking at the occasion, Fashola said freedom and choice were powerful ideas whose pursuit had changed the course of human history dramatically, saying that these were values that were intrinsically human but tragically they were perhaps the most trampled expectations of humanity.

â€œIt is the commemoration of the Nigerian struggle for freedom and choice that has convoked this meeting. Today is the 18th anniversary of the historic election that promised so much for Nigeria but delivered little.

â€œJune 12, 1993 election has become historic and memorable not because it produced the expected results, but because its sabotage produced a reaction that the saboteurs did not contemplate.

â€œIt produced a platform for the expression of the need for change, a better life, true democracy and responsible governance by millions of Nigerians. The elections ignited in Nigeria, the biggest human force known in our history â€“ the consensus of millions for one common purpose,â€ he stated.

Speaking at the event, Hon. Wale Oshun , former Chief Whip of the Federal House of Representatives said the June 12 story was a story of an election in which the sovereignty of all Nigerians was traduced, saying the dream and decision that informed the voting pattern must be sustained to eradicate the nationâ€™s diversity threatening to break up the polity from time to time.

â€œThe Nigerian experience has shown that it is possible to sustain democratic values when leaders are driven to work in the interest of the people. Chief Moshood Kashimawo Abiola sought to work for the interest of Nigerians, but was denied the opportunity when his election was annulled on June 23, 1993.

â€œWe must not forget this and for this we must continue to remember his supreme sacrifice. We should remember also those other fallen heroes and heroines, Chief Alfred Rewane, Mrs. Kudirat Abiola , Chief Adekunle Ajasin, Chief Anthony Enahoro , Chief Abraham Adesanya, Chief Bola Ige, Dr. Beko Ransome Kuti and Chief Gani Fawehinmi and over one hundred youths slaughtered on Ikorodu road one sunny afternoon in July ,1993 and others still living,â€ he stated.

Former Governor of Kaduna State, Alhaji Balarabe Musa urged the present crop of leaders to stand by what is right, pointing out that the fallen heroes of the election stood and sacrificed their lives for it.