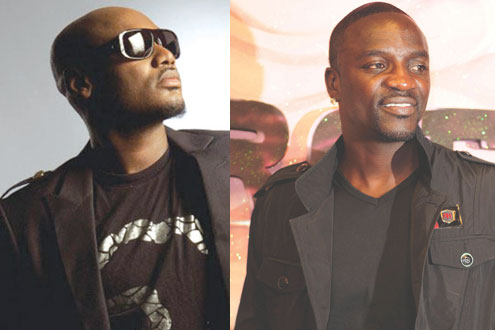 Coming on the heels of the buzz created by the American hip-hop star Kanye Westâ€™s signing of Dâ€™Banj and Don Jazzy of the Moâ€™Hits crew, into his G.O.O.D Music, Senegalese-born, United States Superstar Akon is also set to collaborate with Nigeria superstar Tuface Idibia, in what has been dubbed a perfect Africa connection.

According to a twitter message posted last Sunday morning, Akon hinted that there are plans for another mega-collaboration between himself and Tuface.

The Konvict Records boss tweeted with a picture of him and Tuface, revealing a â€˜master planâ€™ in the works between Tuface Idibia and himself in Atlanta, Georgia, US. His tweet: Me and 2faceidibia working on a master plan in Atlanta! The world is not ready! African Connection.

Meanwhile, some music buffs have hailed the planned collaboration. â€œThis is great news, as it is heartwarming to see such a talented Nigerian artiste being given a wider platform. However, maybe it was only a matter of time. Itâ€™s no news that Akon has collaborated with so many artistes that we now struggle to keep count! In fact, just a while ago, we heard of similar talks between Akon and Tufaceâ€™s former band mate, Faze. Any which way, we await the results of this African Connection,â€ one music critic said of the planned connection.