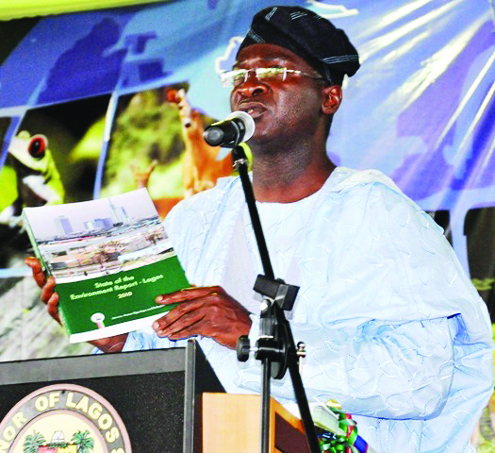 Lagos State Governor, Mr. Babatunde Fashola (SAN) launching a book on the State of the Environment Report-Lagos State 2010 during the 2011 World Environment Day with the theme, â€œForests: Nature at Your Serviceâ€ held at the Blue Roof, LTV 8, Agidingbi Road, Ikeja, Lagos, on Tuesday, June 21, 2011.

Lagos State Governor, Mr Babatunde Fashola (SAN) on Tuesday joined the rest of the world in commemorating the 2011 World Environment Day, calling for a reinforcement of the advocacy that have been made use of in expressing the dangers of climate change and environmental degradation.

Governor Fashola who spoke at the Blueroof Hall at LTV 8 Ikeja where activities marking the day took place added that advocacy remains the only weapon that may be employed to spread the message so that everyone could come to realize the dangers that climate change can pose to man and the environment.

While commending the actors and actresses who were present at the ceremony for using the medium of dramas and plays to spread the message of climate change, he urged them to continue to do the same.

The governor assured the citizens that each time it rains and results in flooding, it is not a sign that the government has not been alive to its responsibilities but a clear indication of nature taking its toll.

He said the rainy season is part of the way nature regulates the environment and has always been managed by preventive strategies put in place by the administration such as was witnessed last year when flood sacked some communities in Ikorodu area.

Governor Fashola said to the credit of his administration, no single life was lost to the massive flooding that took place in Ikorodu area last year when the Ogun River overflowed its banks while similar floods and natural disasters that have ravaged countries like Haiti, Australia, New Zealand and China resulted in the loss of hundreds of lives.

He recalled that when four years ago, his administration embarked on the planting of trees and reclamation of parks, many people criticized the policy out of their ignorance and cynicism.

The governor added that the presentations by the several academics and even the United Nations as a body on the dangers of climate change and the need to be concerned about the forest is a clear vindication of the step taken by the State Government then.

He said the theme of the 2011 celebration which is ‘Forests: Nature at Your Service’ has been given added impetus by the present administration in Lagos which has embarked upon reforestation which is the planting of natural and economic trees that brings about woods like mahogany, thick and iroko all over.

â€œWithout doubt, forest plays a major role in balance of nature. How can we live without trees? When we cut trees, we endanger our lives. We are nurtured in nature and by nature. It is often said that forests are the flags of nature. Forest serve as home for wildlife. The wildlife finds a place for safety and food. As a consequence of forest disappearance, many animals, plants, birds and insects are going into extinction,â€ the governor said.

Governor Fashola also informed that government will pay attention to nature gifts which come in form of wetlands or what is referred to as swamps as major ways of curtailing environmental degradation.

He added that the uncontrolled manner in which the worldâ€™s population is growing is also an indicator of man taking too much from nature without replacing it.

The governor said citizens should also start asking themselves how they have contributed to putting extra pressure on nature, adding that when a particular regime in Nigeria advocated that every couple should have only four children, how many couples produced more than four and put extra pressure on the available resources?

He described Nigeria as the most vulnerable country in Africa because it loses land in the North to desertification which remains a major challenge to massive food production.

Said he: â€œIt is so worrisome that as a result of climate change, our dear country loses vast areas of land to desertification. This is advancing at the rate of 0.6 kilometres annually. This has led to displacements in many of the affected states. Last year, newspaper reports established that Nigeria loses about $5.1billion every year as a result of rapid encroachment of drought and desert in most parts of the Northâ€.

He said experts have postulated that if desertification continues unabated in the North, it will have the effect of increased rainfall in areas like Lagos which may bring about high water level that result in flooding.

In his message of goodwill, the Deputy High Commissioner in the British High Commission, Mr Robin Gwynn commended the Lagos State Government for raising standards of awareness about climate change with a series of events it has already put in place, including that of the World Environment day.

He said the role played by forest in a global eco system cannot be over emphasized, adding that Britain recognises the role of trees in reforestation and has always embraced it.

Also speaking, the representative of the Consular General in the American Embassy, Mr Carl Cockburn saluted the Lagos State Government for its role in combating environmental degradation and wished it the best in its concerted efforts to confront the problem of the environment.

The founder of the Fight against Desert Encroachment, Dr Newton Jibunoh said Lagos must be saluted for designing the most comprehensive programme on climate change.

He said that is why each time he has gone to any part of the country; he has always recommended the Lagos theory which states that if you must fight degradation of the environment, you must be ready to replenish what you have taken from the environment.

Earlier in his welcome address, the Permanent Secretary in the Office of Drainage Services, Engineer Muhydeen Akinsanya said it is disturbing to note that the countryâ€™s forest cover which stood at 30 percent at independence has been depleted to a paltry four percent today with the consequence including soil erosion, diminished bio-diversity and loss of wild life.

He added that the wrong in the environment is worrisome and everyone is concerned, adding that this has resulted in a thorough study of the environment and the achievements of the last four years which has been documented in a book titled: ‘State of the Environment Report for Lagos State’.

â€œAs we see it happening all around us already, Climate Change will hit the poorest the worst and so a concerted reduction in deforestation will help build natural resilience to climate impact. Forests help to tame the adverse effects of climate change such as flood and heatâ€.

He urged everyone as individuals to plant trees at every opportunity because there is much goodness that can be gained from preserving the forest.

The Governor later officially launched a book titled The State of the Environment Report in Lagos State, 2010 which had earlier been reviewed by Professor Isola Adamson.

The ceremony was graced by many dignitaries including the Permanent Secretary in the Office of the Environment, Dr (Mrs) Titi Anibaba, managing director, Lagos State Waste Management Authority, Mr Ola Oresanya, representatives of traditional rulers, friends of the environment and other dignitaries.