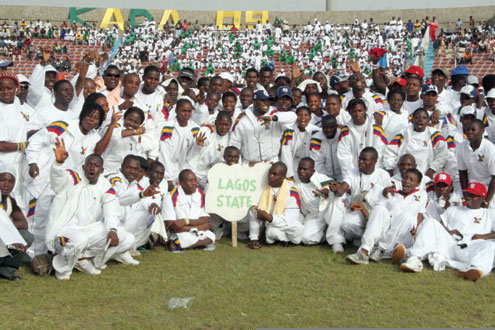 â€¢Team Lagos will hit Port Harcourt on Monday for the Sports Festival.

The Lagos State contingent to the 17th National Sports Festival holding in Port-Harcourt are ready for action, the state government revealed yesterday.

The athletes will depart Lagos for Rivers State on Monday 27 June, 2011, after a special prayer session on Saturday 25 June at the Rowe Park, Yaba, Lagos.

Team Lagos, which comprises of 590 athletes and coaches, will compete in 23 sports at the festival. In the selection of the athletes, focus was on talents displayed by the various athletes at trial competitions held at Ibile Games (the acronym for the state sports festival) and other trials organised by the Lagos State Sports Council and its affiliate sport associations.

Speaking on the level of preparedness of Team Lagos, the Director of Sports, Lagos State Sports Council, Adewunmi Ogunsanya, said attention was placed on picking the best athletes that Lagos parades, adding that as usual with Team Lagos, attention was also placed on breeding discipline and committment.

According to him, most of the athletes are keen to give their all to excel in the colours of Lagos State and they have promised to return to Lagos with medals.

He declared that the vision of the administration of Governor Babatunde Fashola has always been to improve grassroots sports by investing in the discovery of talents, nurturing and exposing the discovered talents to competitions of this nature.

â€œThis is to allow the athletes exhibit their talents in various fields of sports. We thank Governor Fashola for making it possible for the athletes to train for a longer period than they did for the previous games,â€ Ogunsanya said

The Lagos State Sports Council commenced camping of athletes on Tuesday 3, June 2011 for two weeks with 951 athletes before the selection of athletes for the closed camp that emerged as Team Lagos.