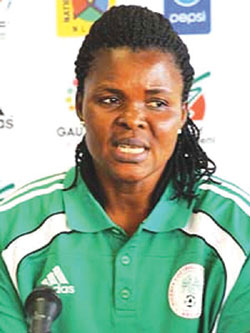 Former Super Falcons Coach, Paul Hamilton, has warned Nigeriaâ€™s female national team to go all out for victory against France in their first match of the Germany 2011 FIFA Women World Cup on Sunday.

The proprietor of Weekend Academy told P.M. Sports early today that he is satisfied with the preparation of Falcons led by Eucharia Uche, adding that the ladiesâ€™ first match against France will determine how far they can go in the tournament.

â€œFalcons cannot afford to lose their first match against France. Nigeria have come of age in the world female football. I think Falcons need is to improve in their strength and speed which will help them to overcome the French team in the match,â€ he said.

Hamilton advised Eucharia to approach their opening match like a cup final, ading that Nigerians wonâ€™t like them crashing out early in the tournament.

â€œFrance are equally good. They are coming to this tournament with high expectations and hope and they have physical players in their team, so Falcons should not give room for any mistake if they want to go far in the tournament,â€ he warned.

Commenting on Nigeria and Germany match in the second match, Hamilton noted that the match will be tough.

Meanwhile,the delegation of 21 players and eight officials that had been in a training camp in Saalfelden, Austria for the past four weeks was received at the NH Hotel Hiedelberg (the teamâ€™s official FIFA hotel for the championship) by a team of FIFA and LOC officials, as well as the Assistant General Secretary (Competitions) of the Nigeria Football Federation, Dr. Mohammed Sanusi.

The Falcons will next play hosts and favourites, Germany, in Frankfurt on June 30 before rounding up their Group A duties against Canada in Dresden on July 5.