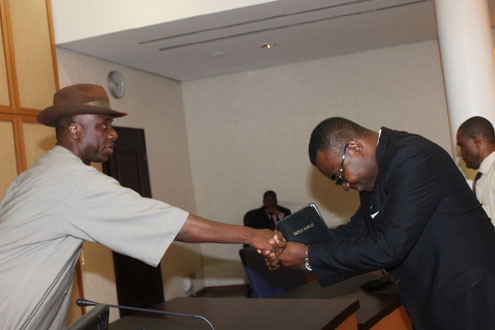 Rivers State Governor, Rt. Hon Chibuike Rotimi Amaechi has tasked the newly appointed commissioner into the State Executive Council of the need to work towards the development of a Rivers economy that would reflect the true status of the people of the state.

Governor Amaechi gave the charge today while swearing-in Dr Chamberlain Peterside, an America- based Professional into the new Rivers State Executive Council as a Commissioner in the cabinet.

The governor noted that the greatest challenge facing the present administration is how to revive the economy of Rivers State which was hindered in the past by the twin problem of insecurity and lack of power supply.

According to the governor, â€œwe currently appear to be in a big problem because of security and other challenges, and we must do everything possible so that even if we do not achieve anything, we will leave for the next government an economy that has taken off,â€ stressing that that can be possible when there is power and security.

He explained that the noise about Nigeria being one of the fastest growing economy does not make any meaning if the economy cannot put food on the table of Rivers people.

According to him, the people are tired of such statements without concrete action to improve their living standard.

Governor Amaechi told the new commissioner that he cannot afford to fail, “because once you fail people will call you all kinds of names,” emphasising that the achievements expected are possible without being corrupt.

â€œLet us not steal public money, let us work together to develop the society and be proud to say to our children what we did to better the lives of our peopleâ€, Governor Amaechi contended, adding that Dr Peterside was appointed purely on merit and congratulated him.

The swearing-in of Dr Peterside brings to seven the number of commissioners appointed into the new cabinet of Governor Amaechi.