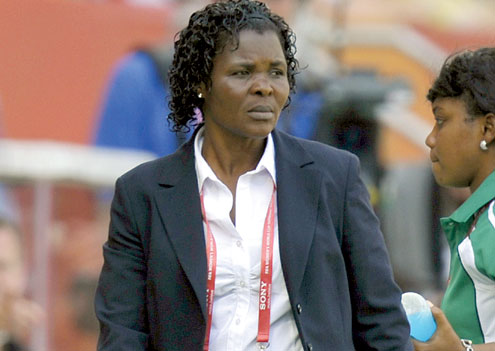 There are strong indications that the Nigeria Football Federation, NFF, is gradually losing confidence in the ability of the Super Falcons to reach the group stage of the ongoing Germany 2011 FIFA Womenâ€™s World Cup.

The Nigerian ladies were beaten 0-1 by France in their first match of the mundial, a result that has put them in a dilemma as they prepare to face Germany in their second group game on Thursday. Football pundits believe it will be hard for the Falcons to scale the hurdle of the German ladies who beat them 8-0 few months ago, after the Falcons won the African Women Championship, AWC, in South Africa.

Speaking on Brila F.M. early today, chairman of NFFâ€™s technical committee, Barrister Chris Green said the chances of the Nigerian ladies making it out of the group are slim. The group parades other highly rated teams like Canada, who were narrowly defeated by Germany 2-1 in their first match on Sunday.

According to Green, â€œwe can only hope for the best against Germany, but it will be very hard.â€ The Glass House top shot said he is already looking beyond the World Cup. â€œThere is need for a total overhaul of the team when they return from Germany. The Falcons are full of ageing legs and we must do something urgently about this after the World Cup,â€ he said.

Meanwhile, former coach of the team, Paul Hamilton said the Falcons ought not to have conceded defeat in their first match of the championship. He noted that the least the ladies could have done was a draw with France.

â€œLosing their first match was very bad. It makes the chances of getting out of the group very slim. A draw with France would have been better,â€ he said.

As part of efforts to salvage the precarious situation, the NFF has ordered the Chief Coach of the Super Eagles to meet with players and officials of the Falcons ahead of Thursdayâ€™s game against Germany.

Siasia has been on a short vacation in the United States, but will head to Europe rather than back home.

â€œThe NFF President has asked me to go to Germany to support the players and officials ahead of their match against Germany,â€ Siasia told KickOffNigeria.com.

The Eagles’ coach will make a brief stopover in England before heading for Germany for the duration of the Falconsâ€™ remaining matches.

The ladies need a good result from their second group game against the hosts and defending champions to stay alive in the competition.