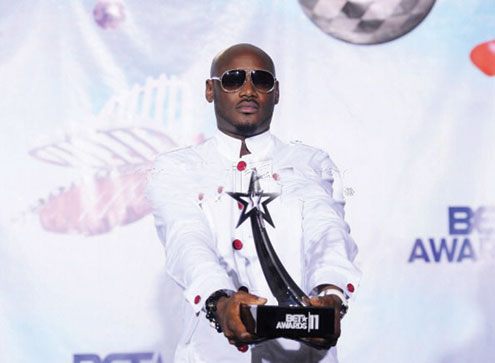 Nigeriaâ€™s Tuface Idibia and Dâ€™Banj recently added another international laurel to their mantelpiece as they emerged the joint winners of BET International Act For Africa at the 2011 BET Awards which took place at the Shrine Auditorium in Los Angeles, United States.

In a very odd twist, the two Nigerian superstars who were the top contenders for the award tied for the singular honour in the same category that had legendary Angelique Kidjo of Benin Republic, Fally Ipupa (Congo DR) D-Black (Ghana), and Teargas (South Africa) also nominated.

At the ceremony, they were both presented with their plaques, though the segment was not broadcast live to the global audience monitoring the show.

In other BET Awards category, Tinie Tempah won the Best International Act (UK) award. Tinie Tempah, born Patrick Chukwuemeka Okogwu is a British-Nigerian. His parents are Nigerian and he recently performed at the 2011 ARISE Magazine Fashion Week in Lagos.