The Face Of Abuja Suicide Bomber 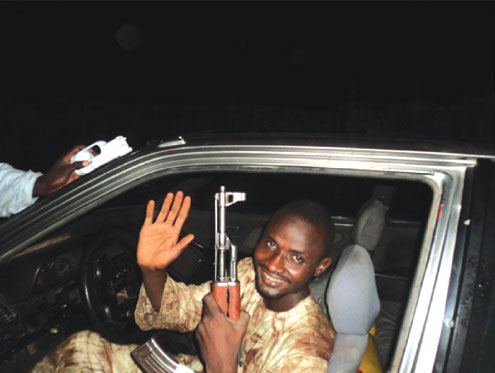 â€¢JOURNEY OF NO RETURN: Mohammed Manga on his way to Abuja where he detonated a bomb at the Police Headquarters car park on Thursday, 16 June, 2011. PHOTO: Blueprint newspaper.

The identity of the Boko Haram member who bombed the Nigeria Police headquarters in Abuja on Thursday, 16 June has been revealed.

According to Blueprint, a newspaper based in Abuja, the bomber was Mohammed Manga, a 35-year old businessman from Maiduguri, Borno State who had five children.

He was believed to have left N4 million in his will for his five children â€“ two girls and three boys â€“ before embarking on the journey of no return to Nigeriaâ€™s capital.

There was proof also that Manga was accompanied on the deadly mission by at least a collaborator in the plot, who took his last photograph as he drove through the streets of Abuja. The collaborator might have disembarked from the car before Manga reached the Louis Edet House headquarters of the Nigeria Police.

Blueprint also reports that, contrary to a claim by the police authorities that the bomber had used a Mercedes Benz â€˜V Bootâ€™ car, he actually used a Honda 1986 model. According to Blueprint, these shocking details and others were made exclusively available by the leadership of the Islamist sect, Jamaâ€™atu Ahl-Sunnati Lil Daâ€™awati wal Jihad, popularly called Boko Haram, in a telephone interview conducted in Hausa language. The groupâ€™s spokesman, Abu Zaid answered questions posed to him.

The group also e-mailed photographs of a grinning Manga as he undertook the revenge mission. It was the first time it was giving a glimpse into its operations.

One of the most startling information given by Abu Zaid was that the attacker was Mohammed Manga, who was better known and addressed by his friends and business associates as Alhaji Manga.

â€œHe is originally from Adamawa State but he was born and raised in Maiduguri, where he embraced the teachings of the late Mohammed Yusuf,â€ the spokesman told Blueprint. Mohammed Yusuf was the leader of the group and was killed by the police in 2009 following the bloodiest clash involving Boko Haram in which thousands of the sectâ€™s members and other people died.

The late Manga was Fulani by tribe and he started both as a commercial and private driver at different times in his adult life. A few years before the July 2009 Boko Haram uprising, Manga began to travel to Cotonou in Benin Republic and later Dubai frequently in order to buy all kinds of goods.

He was a major contributor to Boko Haramâ€™s arms build-up.

Abu Zaid further told Blueprint that Manga left a will of over N4 million to his two daughters and three sons and urged fellow believers to sacrifice their lives for the sake of Allah. This, the group said, is evident in the last-minute pictures of Manga, believed to have been taken at a camp somewhere in Borno State.

The manâ€™s last will and the photographs are proof that Manga was on a suicide mission and that his death at the Louis Edet House Headquarters of the police was not an accident.

â€œHe was calm and never hesitated or showed fear,â€ Abu Zaid recalled, adding that everyone at the scene that night on the eve of the attack was envious, wishing it was their chance to act and gain entry into paradise.

According to Abu Zaid, the planning of the attack targeting the Inspector-General of Police, Alhaji Hafiz Ringim, was not in any way different from the way and manner they plan other attacks around the country, insisting that the only difference was that this mission was abruptly brought closer in response to the remarks made by Ringim that he would eradicate Boko Haram within weeks.

The IGP had on June 15 boasted, while receiving 10 armoured personnel carriers donated to the police by the Borno State government, that Boko Haramâ€™s days were numbered.

â€œNow that the (general) elections are over, our attention would be concentrated and I want to assure you that the days of the Boko Haram are numbered,â€ Ringim had told a gathering at the Government House in Maiduguri, in the presence of the state governor Kashim Shettima.

Abu Zaid also claimed that the bomb his group used in the attack was a ready-made one, which the sect acquired from abroad,â€ adding, â€œwe are going to use several of them in future attacks.â€

The group dismissed media reports that it might not have planned a suicide attack but that the bomb blast was merely an accident in which the attacker was trapped, stressing, â€œeveryone had waited patiently for the outcome of that operation.â€

Abu said Boko Haram is now believed to be headed by Malam Abubakar Shekau, the deputy of the late Mohammed Yusuf, killed by the police in 2009.