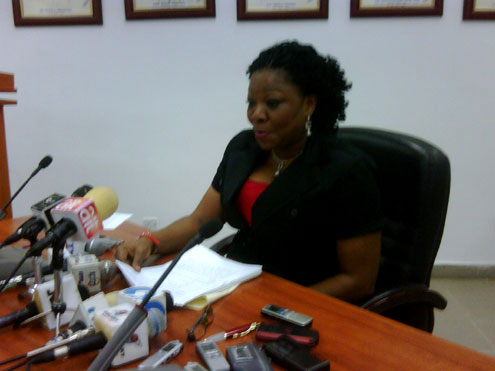 The Department of State Security Service, SSS, on Monday in Abuja announced that the war against the dissident group also known as Boko Haram, will soon be won.

SSS said its operatives have arrested some identified key cell commanders and members of the group in Bauchi, Borno, Kaduna, Kano, Yobe and Adamawa states.

The security agency however stated that for strategic operational reasons, details of those arrested will remain classified as they are still undergoing the process of de-radicalization and perception management geared towards winning their confidence back to the society in adherence to the “stick and carrot” policy of President Goodluck Jonathan over the Boko Harram menace.

In a media briefing hosted at the SSS Headquarters in Abuja by the spokesperson of the security agency, Ms. Marilyn Ogar, the agency disclosed that on 23 May, its operatives discovered and successfully demobilised eight improvised explosive devices, IEDs, concealed in small and medium sized tins beneath a staircase in Kafanchan, Jema’a Local Government Area.

Ms. Ogar further stated that her organisation on 29 May discovered and successfully demobilised another improvised explosive device planted at the Post Office area of Gonin Gora, Chikun Local Government Area in Kaduna state.

The agency again on 10 June, discovered yet another explosive device concealed in a sack and placed under a kerosene tank along Engr. L. D. Abubakar Road, off Abuja – Kaduna Expressway by the Central Market in Gonin Gora, also in Kaduna state.

Continuing, Ms. Ogar revealed that information from a patriotic citizen on 14 June, led to the discovery of an explosive device wired with 9 volts battery concealed under the railway track behind Dambo International College in the Barnawa area of Kaduna metropolis.

Similarly, acting on a tip off by another well meaning Nigerian, components of yet to be assembled explosives were discovered and recovered by the agency on 27f June at a hotel in Kaduna. The components were said to be for the bombing of a popular shopping mall in Kaduna.

Some of the components recovered are a camping gas cylinder with a pin, detonating cables, a bottle of distilled water, pliers, masking tapes and clips.

The image maker also used the opportunity to apologise to the peace loving Abuja residents and those of the adjoining communities for the temporary inconveniences they are experiencing due to the stop and search operations mounted by security agencies.

She noted that the operation has become necessary in the interest of the collective safety of residents and called on them to be security conscious since the issue of security is everybody’s business.

She declined to expatiate on what being “good” with el-Rufai entailed and also declined to answer further questions on the matter.

Meanwhile, former Finance Minister; Mrs. Okonjo-Iweala and former Permanent Secretary at the MInistry of Petroleum Resources, Ms. Ama Pepple were seen at the headquarters of the SSS.

Their presence at the agency’s headquarters may not be unconnected with the screening of the last batch of the ministerial nominees.

Okonjo-Iweala was admitted into a conference hall on the ground floor, left wing of the expansive edifice moments after Ms. Pepple was seen leaving the same conference hall.