Amber Rose Out Of Nigerian Show 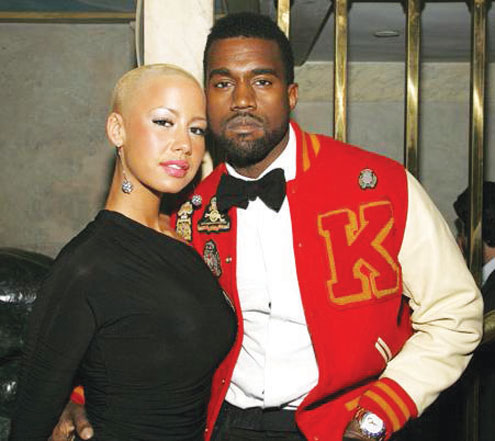 â€¢Amber Rose with Kanye West, while the going was good

One of the major headliners of the much hyped maiden edition of Music Meets Runway, Amber Rose, has announced that she will not be in Nigeria next Saturday to host the show.

The American sex symbol and model made this known in a tweeter message she posted early Monday morning.

According to the diva, she wonâ€™t be in Nigeria because she wasnâ€™t properly booked. But interestingly, few hours after the news of the tweet message hit the town, the controversial model quickly deleted the tweet on her page, fueling suspicions over her intent.

However, in a swift reaction, the publicists for the maiden Music Meets Runway 2011 show, The Bobby Taylor Company, expressed shock at Amberâ€™s tweet.

In a statement sent to Showbiz Trends, the firm stated that the organiders were in contact with Amberâ€™s agents until the nude pictures of the model stalled the consultations.

â€œDue to recent developments of Amber Roseâ€™s nude photos that surfaced on the internet last week, we were in discussion as to what to do about the situation with some of our sponsors who had understandably shown some concern,â€ the statement read.

It continues, â€œWe were still in discussions with our sponsors to accommodate Amber when we read Amber Roseâ€™s tweet about her not being booked to host Music Meets Runway.

â€œAmber has indeed been booked and paid for through a reputable international booking agent and we were as surprised as anyone to see the tweet. This situation is under investigation and details will be passed as more information comes,â€ the statement added

The show, according to the organisers, will still hold without Amber at the Expo Centre of the Eko Hotel and Suites, Lagos.

Apart from fashion, 10 top music stars are also expected to belt out hits on the runway.

Music Meets Runway is an event poised and designed to create awareness for the growth the Nigerian fashion industry has recorded in recent times, and to create a networking opportunity for the fashion industry, fashion journalists, retail buyers and trendsetters.

â€œWe want to assure the public that we are bringing you a great show with some of the most amazing Nigerian artistes and designers and this event will be nothing short of a phenomenal experience,â€ one of the organisers stated.

Amber, 28, has been in the news since last week when her salacious nude pictures circulated on different websites and blogs. She is best known for her high-profile relationships with rappers Kanye West and Wiz Khalifa.

She has said that being with Wiz Khalifa was the best decision she made after going through a rough relationship with ex-boyfriend Kanye West.

She has posed for a Louis Vuitton print advertisement featuring Lamon Colemanâ€™s new line of sneakers. Amber has also made cameos in music videos such as Ludacrisâ€™ What Them Girls Like, Young Jeezyâ€™s Vacation, Mary Maryâ€™s God in Me, Nicki Minajâ€™s Massive Attack and Fabolousâ€™ You Be Killinâ€™ Em.