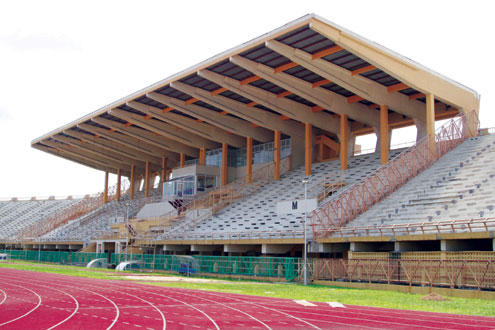 In the past, the development of sports in Lagos State could not be compared to other states in the country as athletes from those states flooded the state in search of greener pastures. This was because of the world class facilities put in place by the government.

Most of these athletes have sought solace elsewhere when it became apparent that they could no longer get what they want from the Centre of Excellence.

Administration of sports was at its lowest ebbs until the coming of Governor Babatunde Raji Fashola, who, since 2007, has gradually brought the sports glory back to Lagos.

When Fashola was elected the governor of Lagos State in 2007, there were doubts as to whether he can transform sports in the state. To the surprise of many Lagosians, the sports loving-governor is gradually turning things around as he has embarked on infrastructure development through the building of a mini stadium on Lagos Island and renovating some sports centres such as Agege Stadium, Onikan Stadium, Apogbon playground and Oshodi Sports Centre.

Governor Fashola also promised to build at least a mini stadium in each of the local councils before the end of his administration.

With the appointed of Barrister Waheed Enitan Oshodi, as the new sports commissioner as Fashola begins his second term in office, it is expected that sports in Lagos will continue to enjoy a pride of place.

Oshodi, who took over from Prince Ademola Adeniji-Adele, was a former member of the board of the Lagos State Sports Council during the reign of Deji Tinubu as the Executive Chairman.

Oshodi, a graduate of Engineering from University of Lagos, Akoka, studied Law in England, picked interest in table tennis because the sport was under his supervision. He later became the Chairman of the Lagos State Table Tennis Association during the reign of the former Commissioner for Sports, Barrister Opeyemi Bamidele.

As the Chairman of the association, Oshodi lifted the standard of the sport beyond the expectations as the former President of Nigeria Table Tennis Federation, Cosmas Maduka, reckoned with his unflinching support and his unique drive to regenerate the game.

His passion for table tennis made him to organise the first Procold Lagos International Table Tennis Championship, endorsed by Didik Novandi, the Country Manager of Procold and other Nigerian stars such as Africaâ€™s and Nigeriaâ€™s number one ping ponger, Segun Toriola, Funke Oshinake, Cecilia Otu, Monday Merotohun, Seun Ajetunmobi as well as great home-based ping pongers who participated in the event which held at the University of Lagos Indoor Sports Hall, Akoka.

He also introduced a table tennis league which was envy of the Nigeria Table Tennis Federation as the tourney kept the players in competitions which held on weekly basis with enticing cash awards.

Oshodiâ€™s outstanding records aroused the interest of the current president of the Nigeria Table Tennis Federation, Kayode Waheed Omotoso, who called on him to join the board of the NTTF.

Though Oshodi has good credentials in sports, no doubt, there are many challenges that will confront him as the new commissioner. P.M. Sports observed that the last sports administration in the ministry had not done enough considering the facilities put in place by the state government and the strong passion Governor Fashola has for sports. Many associations failed to carry out their duties effectively blaming lack of funds for their dismal performance.

The squash and basketball courts and other sports arenas were not renovated as some of the athletes complained about lack of facilities.

Some of the coaches who spoke to P.M. Sports lam ented that the Sports Ministry was not sensitive to their needs and that of the players. Some of them blamed the average performance of Team Lagos in the ongoing 17th National Sports Festival in Port Harcourt, Rivers State on late preparation.

Some of the challenges which Oshodi will face include the stateâ€™s Challenge Cup. In the past, Lagos FA Cup was a glamorous competition but today, it is a competition that has not really attracted corporate bodies. The tourney is now being played without a sponsor. Although it is the duty of members of Lagos FA to look for sponsorship, they still need the support of the ministry to carry out their duties.

The glamour of the Principalâ€™s Cup has to be brought back if the state really wants to discover talents. A robust partnership between the Sports Ministry and the Ministry of Education is needed to revive the school sports in the state.

The last two MTN Lagos Street Soccer tournaments, which were organised by the Sports Ministry inconjunction with Lagos State Football Association did not live up to expectation. The participating teams complained bitterly about the organisation, officiating and coordination of the competition.

If a state like Edo State can host Olympic Games and All Africa Games qualifying series, Lagos should host bigger matches played by the senior national team.

On the Nigeria league, it is a shame that Lagos cannot boast of a Premier League club. If states like Rivers, Oyo and Kwara can boast of two clubs in the league, it is sad that Lagos is still struggling to get one. Gone are the days when Stationery Stores of Lagos, defunct NEPA FC and Nitel operated from Lagos. Today, Lagos which the home of football has been relegated to the background.

The challenges before Oshodi are numerous to tackle especially with Governor Fasholaâ€™s vision and passion for sports.