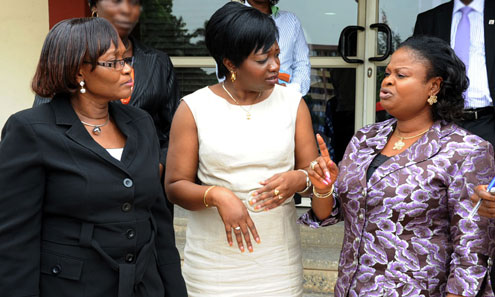 Lagos Deputy Governor, Hon. Adejoke Orelope-Adefulire (right) explaining a point to Agatha Amata (middle) and Mrs. Josephine Effa-Chukwuma of the Gender Based Violence Response Network during a protest visit to the Deputy Governor by the Group at her office, Alausa, Ikeja.

The Lagos State Government has established toll-free lines for victims of domestic violence in the state, urging the citizens to take advantage of them to report violence happening around their homes.

The Deputy Governor of the State, Hon. Adejoke Orelope-Adefulire dropped the hint while receiving members of the Gender Based Violence Response Network, a non-governmental organisation who were on protest visit to her office over the gruesome murder of â€˜Titilayo Arowoloâ€™ who was allegedly murdered by her husband.

The group also called on the police not to treat the murder as a case of psychiatric patient as recent developments and claims by the husband portend.

In an emotional laden voice, Hon. Adefulire expressed the governmentâ€™s sadness over the incident and announced that an action committee is being set up by the State Government to monitor on-going investigations and ensure that the law enforcement agents bring the perpetrator to justice.

She said there can never be any justification for violence against women, noting that women themselves must seek the help of government and non-government organisations when faced with such problems.

â€œEvery woman facing similar crises in their homes must come forward and report; marriage is not a do or die affair and as care-givers, women ought to be pampered by their husbands and not be abused, beaten or killed,â€ she added.

Adefulire observed that the case of domestic violence against women is on the increase in the recent past because women who are the direct victims have refused to open up, adding that “since marriage is an institution we must love each other in order to protect it and not abuse it. We must not turn the institution of marriage into a slave camp where women are beaten and constantly abusedâ€.

The Deputy Governor disclosed that the Fashola administration has deemed it fit to establish transit homes for women who are facing domestic violence, adding that women in the state must take advantage of this good gesture from government to seek assistance from abusers masquerading as husbands.

While seeking the partnership of NGOs with the government to end the scourge, she challenged religious leaders to preach to the congregation the need to eschew violence against their spouses and children.

“We need the help of religious organisations both the churches and mosques to preach the need to sustain love since marriage is also about love and hence we must change the orientation of our people who believe that women must die or endure any unnecessary hardship in the course of keeping their home,â€ she declared.

Adefulire also enjoined other states in the country to emulate Lagos State by ensuring the speedy passage of the law against domestic violence, noting it is only when there is an enabling law that the campaign against the crime can be properly addressed.

Earlier in her remark, the leader of the group, Mrs. Josephine Effeh-Chukwuma, said the group came to visit the Deputy Governor to ask her to lend her voice to the call for the perpetrator of Titilayoâ€™s murder to be brought to book.

She said the group is following up on the case, while using the opportunity to call on the police to ensure that they carry out a thorough investigation and ensure that justice is done.

Mrs. Chukwuma said all stakeholders – the community, religious bodies, traditional institutions and government agencies – must join in the campaign against domestic violence.

Another member of the group, Agatha Amata, while acknowledging previous roles of the government in similar circumstance, urged the state government to re-orientate the general public on the need to put an end to violence against women.