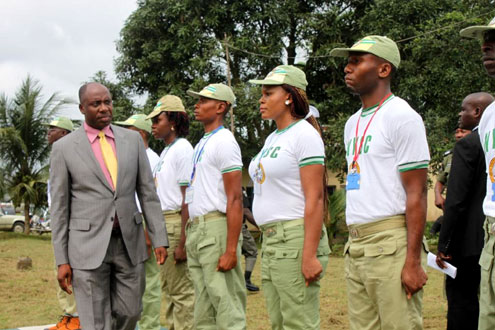 Gov.Chibuike Amaechi inspecting the Guard of Honour at the Swearing-in-ceremony of 2011 Batch 'B' Orientation exercise at NYSC Camp,Nonwa-Gbam,Tai LGA.

Almost a month after the abduction and release of five corps members in Rivers State, Governor Chibuike Amaechi has announced that the abductors had been arrested by security agencies that traced them to their hideout and would be facing trial.

The governor disclosed this while tasking members of the National Youth Service Corps (NYSC) to see themselves as change agents in the development of Nigeria at the swearing-in ceremony of the 2011, Batch â€˜Bâ€™ Corps members posted to Rivers State at the NYSC Permanent Orientation Camp, Nonwa/Gbam in Tai Local Government Area.

The governor said as youth corps members engaging in one year national service, they were in a better position to champion the crusade for a new change that would make for an egalitarian society in Nigeria.

He urged them to use their position to preach change, unity and brotherliness, stressing that they should not be part of elements of destruction as the future belongs to the youths.

Governor Amaechi challenged them to represent their families, communities and states well by being good ambassadors of the NYSC scheme and identifying with the rural people.

The State Chief Executive commended them for accepting to come to serve in Rivers State, in spite of the challenges, noting that while cases of kidnapping are recorded in different parts of the country, the Rivers State Government has taken proactive measures to reduce the incidence to the barest minimum, emphasizing that the abductors of the 5 corps members have been arrested and they would face the law.

The governor promised to continue to assist the NYSC scheme in the state to enable it achieve its set objectives noting that the state government will embark on the renovation of the hostels in the camp as well as make it conducive for their stay.

The Chairman of the state NYSC Governing Board and Secretary to State Government Mr. George Feyii, said the NYSC scheme was set up to promote national unity, friendship and integration and urged members to be ready to serve in any part of the state that they would be redeployed.

Mr. Feyii, who was represented by the Permanent Secretary in his office Mr. Solvins Okari, advised corps members to make the best use of the scheme to learn the culture of the people and integrate themselves fully with the local people.

Earlier the State Coordinator of NYSC Mrs. Josephine Okuonghae said 3,140 Batch â€˜Bâ€™ Corps members were deployed to Rivers State and participating in the orientation course that would equip them to face the challenge of the scheme.

Mrs. Okuonghae urged the corps members to be disciplined throughout the period and lauded the Rivers State government for the robust assistance the scheme has been receiving in the state.