EFCC Tackles Bankole Over Plot To Abort His Trial 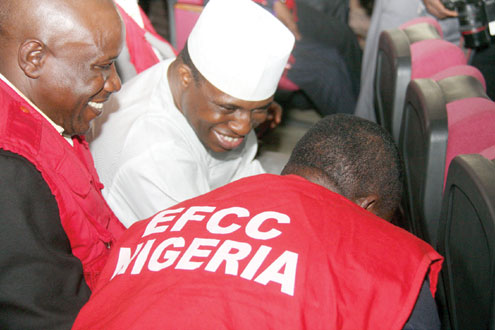 The Economic and Financial Crimes Commission, EFCC, on Thursday tackled former Speaker of the House of Representatives, Hon. Dimeji Bankole, over his objection to his ongoing trial before an Abuja High Court.

Bankole who is facing trial for allegedly obtaining illegal loans to the tune of 38 billion Naira, to pay enhanced running costs and allowances of House members had asked the court to quash the charges brought against him by the anti graft agency.

The ex Speaker had also argued that there was no evidence linking him personally with the alleged offences since he only gave effect to the decision of the whole House and had already been scandalized by the press and the EFCC over the allegations and contended that he would not get a fair trial.

In its opposition to Bankole’s claims, the EFCC took on the former Speaker on each of his submissions and asked the court to be wary at this stage of proceedings and not delve into the substantive matter.

It contended that the court runs the risk of making far reaching pronouncements at this stage in respect of the proof of evidence, if it allows itself to be carried away by the arguments of the embattled former Speaker and urged the court to bear in mind that trial has not started and should refrain from going into the substantive issues.

It submitted that Bankole was charged, not as Speaker or a Legislator, but as a member or the Head of the Body of Principal Officers, that he was charged in exercise of his administrative functions not legislative functions.

In addition to this, EFCC argued that it is clear from the Head Note of Section 3 of the Act, which is â€œFreedom of Speechâ€, that the intention of the Act is only to protect free speech during debate in the House and cannot be a blanket protection for all criminal acts.

It contended further that the door is firmly closed against Bankole and that he lacks powers to raise issues about the authority of the EFCC to prosecute him. This, according to the agency, is because the burden is on the ex Speaker to show that the Economic and Financial Crimes Commission did not have the permission of the Attorney-General of the Federation to prosecute him and or to brief a private legal practitioner in that regard.

On Bankole’s claim that there is no evidence linking him personally with the alleged offences since he only gave effect to the decision of the whole House, the EFCC submitted that there are enough evidence in the Proof of Evidence linking the ex Speaker with the offences of criminal breach of trust and stealing and that without his final approval, none of these acts would have been committed.

It further argued that the question as to whether Bankole acted dishonestly can easily be ascertained by his conduct and that the Rules and Regulations which he violated in approving those unauthorised sums were not made for fun but were made to check endemic cases of corruption in the country.

The agency also refused to separate the person of Bankole from his position as Speaker, arguing that in cases of corporate fraud, that the directing minds of the corporate body shall be held criminally liable for deliberate infractions of the law.

On the ex-speaker’s claim that the House merely shared money belonging to themselves, the EFCC enthused, â€œMy Lord, there is a grave and fundamental misconception here. Even though the loans were illegally obtained (that is without following guidelines) once they were paid into the account of House of Representatives, which is an arm of government, the money was already standing to the credit of government, not the personal funds or account of Mr. Bankole or the members of the House of Representatives”.

To bring the point home, the agency further stated that now that Bankole has left office as Speaker of the House of Representatives, is he the one that will now pay back those loans? Of course not! The mess he left behind will have to be cleared by government and not himself or his family, the EFCC said.

Citing a statement made by a staff of House of Representatives, Mr. Sani Omolori, contained in the Proof of Evidence, where he stated as follows: â€œIt was agreed, after discussions at the level of the Hon. Speaker, and the two Chairmen of the appropriation committees to take a loan of 4 billion naira and to reflect it appropriately in the 2011 budget together with what was outstanding with the bank. This prompted the memo dated 4th November, 2010. The two Chairmen gave the commitment in writing to reflect the payment in 2011 budget while the Hon. Speaker approved the process of the loan from UBA.â€

On the claim of being scandalized by the press and the EFCC and would thus not get a fair trial, the anti graft agency state that Bankole’s claims smacks of nothing but an attempt to turn his trial into a political event and urged the court to resist it since he was simply arrested, detained briefly, interrogated and charged to court like every other Nigerian.

It accused the former Speaker of seeing himself to be above the law and feels indignant that anyone dares to arrest him and called on the court to condemn and reprimand him.

The EFCC concluded its arguments by urging the court to dismiss Bankole’s Preliminary Objection and allow it to prove its case noting that the war against corruption cannot be halted by flimsy legal technicalities, seemingly clever subterfuge and dodgy arguments.