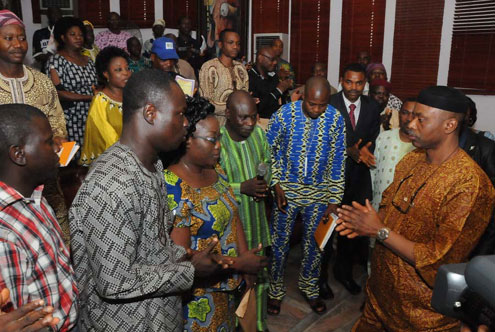 Ondo State Governor, Dr Olusegun Mimiko (R ) addressing appreciative labour Union Leaders in Akure at the weekend shortly after approving the payment of the N18,000 Minimum Wage Salary at the Governorâ€™s Office at the weekend.

The Ondo State Government on Sunday attributed its commitment to the welfare of its workers for its decision to commence the payment of the N18, 000 minimum wage to its workers.

The State Information Commissioner, Mr. Ranti Akerele, also debunked insinuations that the development was done due to pressure mounted on it by a particular political party.

He said that all the Ondo State Government did was to submit to the will of the law and its commitment to the advancement of its workforce being the only Labour Party (LP) government in the entire country.

His words: “Mr. Governor, Dr Olusegun Mimiko consulted widely with various stakeholders in the state and acted on the advice of the Attorney General and Commissioner for Justice of the State. Mr. Governor was informed of the need to obey the Act given the provisions therein.

“We also as a Labour Party Government vis-Ã -vis our avowed commitment to the welfare of our workers in the state decided to ensure that we do our best for them and ensure that they are happy at all times. And we are gratified by the outpouring of spontaneous joy and goodwill that has continued to greet the decision by the government ever since the arrangement was made by Mr. Governor, Dr Olusegun Mimiko.”